French Mayors Call for Investigation by International Commission of Inquiry RE: 1988 Massacre in Iran 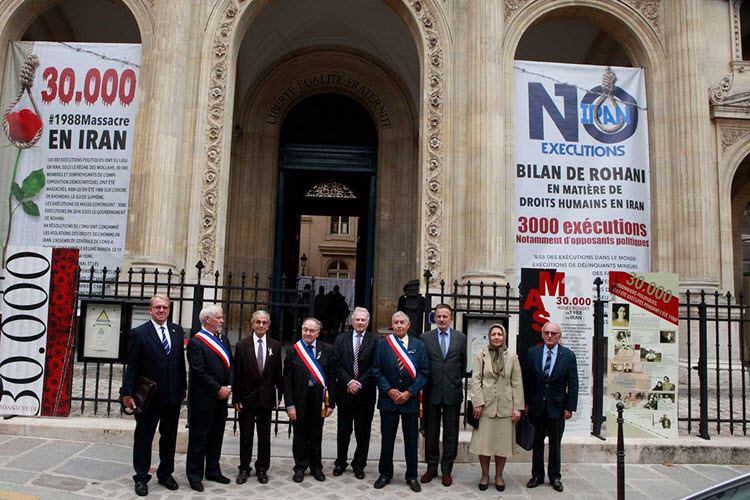 London, 19 Aug – The formation of an international Commission of Inquiry into the massacre of some 30,000 political prisoners in Iran during the summer of 1988 has been called for by Human Rights defenders, dignitaries, European politicians and the Iranian Resistance, who aim to bringing those responsible for this crime against humanity to justice.

This human rights issue should be at the core of the West’s policy on Iran, and they have urged the UN, EU and the US to put the issue of human rights in Iran on top of their agenda.

On Thursday, August 17, 2017, the call was made during an exhibition about the 1988 massacre, that took place upon the initiative of Mr. Jean-François Legaret, the Mayor of Paris municipality District 1. At this municipality.

In her message to the exhibition, Maryam Rajavi, the President-elect of the Iranian Resistance, said that 30,000 political prisoners were hanged in Iran in the days of the summer of 1988, and there was no reaction by Western governments.

Remaining silent over this tragedy betrayed humanity, as the regime realized that their crimes had no consequences. Consequently, they continued exporting their terrorism and fundamentalism abroad and across the Middle East.

Relatives of the victims and people who spent years in Iranian prisons shared their observations with the audience during the exhibition.

The Iranian people want those in charge of the massacre held accountable. This has become an important political demand. The UN High Commissioner for Human Rights is urged to set up an independent commission of inquiry to investigate the 1988 massacre. The UN Security Council are asked set up a special tribunal, or refer the issue to the International Criminal Court to arrange for the prosecution of the leaders of the Iranian regime.

During the past four years, President Hassan Rouhani appointed Mostafa Pour-Mohammadi, one of the key officials in charge of the 1988 massacre, as Minister of Justice. The Justice Minister he appointed for his second term, Alireza Avaie, is another perpetrator, who was previously designated as a human rights violator by the European Union. Most shocking is that Supreme Leader, Ali Khamenei, intended to put a member of the 1988 massacre’s Death Commission into the president’s office, but the nationwide campaign calling for justice foiled his plan.

Mrs. Rajavi urged all governments to make their relations and trade with the Iran contingent on an end to executions and torture.

Scottish politician, Struan Stevenson, President of the “European Iraqi Freedom Association” and former President of the European Parliament’s Delegation for Relations with Iraq, was one of the dignitaries who took part in this exhibition and supported the call by the head of the opposition.

Stevenson condemned EU Foreign Policy Chief, Federica Mogherini, for her recent trip to Iran, saying, “Rouhani has been hailed in the West as a moderate and a reformist, despite the fact that more than 3,500 people, including 80 women, have been executed during the four years he has been in office, catapulting Iran into pole position as the world’s number one state executioner per capita. Several hundred people have been executed so far this year, including women and teenagers. Three days before Mogherini arrived in Tehran, Amnesty International published a 94-page report highlighting the ‘web of oppression’ that pervades Iran and detailing the catastrophic human rights situation in the country.”

He added, “The French government and the EU should also be demanding a full United Nations inquiry into the 1988 massacre, with Khamenei, Rouhani and their clique of killer clerics indicted for crimes against humanity and brought for trial before the international courts in The Hague.”

Khomeini, who founded of the clerical regime, issued a fatwa in the summer of 1988. It was unprecedented in the history of Islam, in that it stated that all those who were imprisoned throughout Iran and were still loyal to the People’s Mojahedin Organization of Iran should be executed. More than 30,000 political prisoners who were serving their terms were executed within a few months. The Death Committee oversaw trials that lasted only a few minutes, and sent to the gallows anyone unwilling to condemn the PMOI (MEK). These victims were buried at night, in secret mass graves.

Although the regime has attempted to silence The Justice seeking movement on this crime against humanity in Iran, the movement thrives.

US sets $5mn bounty on Chinese man over Iran dealings

AFP - The United States unveiled a new indictment and...