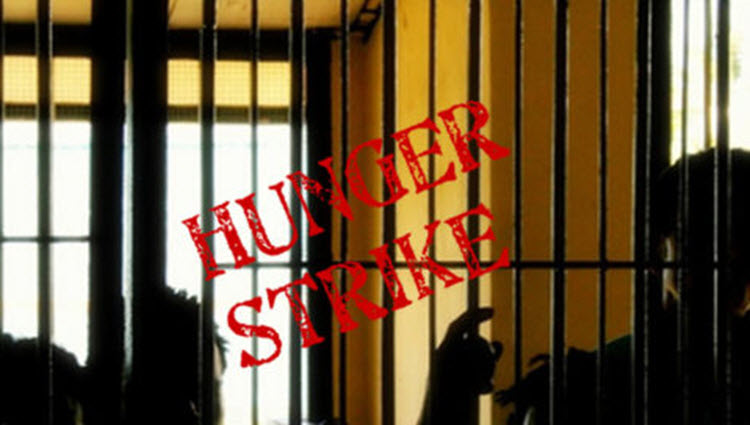 London, 30 Aug – A few days before Hassan Rouhani’s inauguration of his second term as president,
Prison guards forcibly transferred 50 inmates to a separate hall without allowing them to take their personal possessions, including their medicine. It’s reported that during this process, several prisoners who protested were beaten and injured.

On July 30, the special guards of Gohardasht Prison, west of Tehran, also known as Raja’i Shahr, raided a ward where political prisoners, prisoners of conscience, human rights defenders, trade unionists, journalists, and students were kept. They were transferred to Hall 10, a high-security section, where surveillance cameras and listening devices are installed everywhere, including the bathrooms, in an attempt to keep the prisoners under strict control. Hall 10 lacks minimum facilities, including beds and hygienic fitments, and its windows are sealed, so there is little ventilation.

The prisoners have gone on hunger strike in response, and demanded their transfer to their previous ward and the return of their personal belongings. A month into the hunger strike, despite their deteriorating health and threats by guards to send them to solitary confinement or execute them, they remain resolved.

“The measure is apparently a reaction to the prisoners’ protests to their deteriorating conditions and their secret correspondence with international bodies about the inhuman treatment of inmates in Iran’s prisons,” writes Amir Basiri in his article for The American Thinker.

Human rights activists across the world are condemning the inhumane treatment of these prisoners. Protests have been staged in several countries by supporters of the Iranian resistance, who are demanding that the international community hold the Iranian regime accountable for its human rights violations.

Magdalena Mughrabi, Deputy Middle East and North Africa Director for Amnesty International, in a statement published on the organization’s website said, “The fact that detention conditions have become so poor that desperate prisoners feel they are forced to go on hunger strike to demand the most basic standards of human dignity is disgraceful and highlights the urgent need for reforms to Iran’s cruel prison system.” Amnesty International called on the Iranian authorities to allow international monitors, including the UN Special Rapporteur on the situation of human rights in Iran, to conduct independent, unannounced inspections of Gohardasht Prison and other prisons across the country.

The National Council of Resistance of Iran (NCRI) has issued several statements.
The opposition coalition warns against the threats to the lives of the prisoners and called on international human rights organizations to take action.

Inmates in other prisons across the country have gone on hunger strike in solidarity with the prisoners at Gohardasht, including prisoners in Tehran, Zabul, and Ardebil. The hunger strike of Gohardasht inmates has gained support across Iran; in fact, Dr. Mohammad Maleki, the first chancellor of Tehran University after the 1979 revolution, and a prominent political dissident, declared his support of the hunger strikers.

The regime in Tehran is facing a difficult situation, with setbacks in its regional agendas, and mounting activism and protests by opposition supporters inside the country. Basiri writes, “The increased pressure against political prisoners can be a prelude to a bigger disaster.”

Tehran’s General prosecutor, Abbas Jafari-Dolatabadi, who is himself subject to sanctions by the European Union for human rights violations, reiterated the regime’s decision to continue mounting pressure against political prisoners on August 23, claiming, “The judiciary would not succumb to the hunger strike of prisoners.”

Basiri concludes, “If western politicians are waiting for the government of Hassan Rouhani to show a sign of moderation, they’re in for a big disappointment. Meanwhile, the lives of prisoners of conscience and political prisoners hangs in the balance, and they’ve resorted to hunger strike, the only measure they have to defend their lives and dignity.”

Iraq’s al-Maliki to visit Iran in May