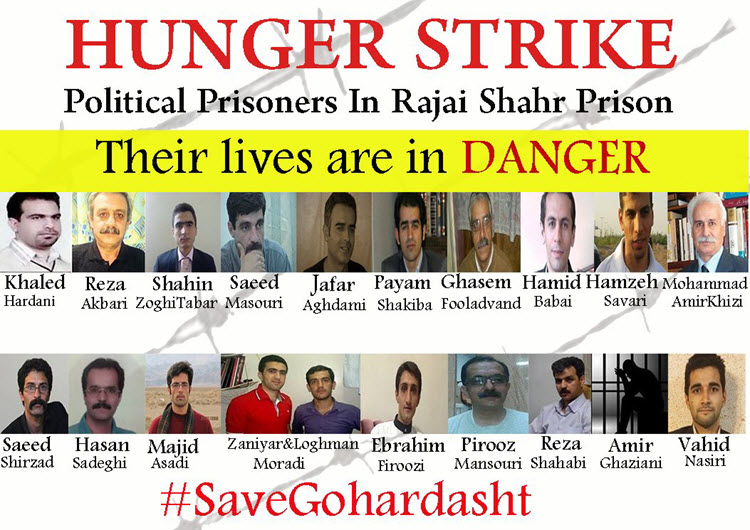 London, 29 Aug – The second term of Iranian President Hasan Rouhani, has only just begun, and his “moderate” presidency is already being challenged.

More than 20 Iranian political prisoners at Gohardasht prison, west of Tehran, were forcibly transferred to accommodations where conditions are described as “unbearable”. Their response was to go on a hunger strike, which has lasted for a month, now. Political prisoners at other jails have voiced their support, and many have joined the protest action. They are concerned, as it’s been reported that the striking prisoners at Gohardasht are being denied medical care by authorities.

Guards assaulted prisoners who were unwilling to move, and deprived the inmates of privately-purchased prescribed medications and personal belongings, including personal photographs and letters, according to reports. The political prisoners also lost food supplies, kitchenware and a refrigerator, which is a terrible hardship in a penal system where inmates often have to buy food from canteens to supplement the inadequate meals provided.

Amnesty International reports, “They are held in cells with windows covered by metal sheets, and deprived of access to clean drinking water, food and sufficient beds. They are also barred from having in-person family visits and denied access to telephones, which are usually available in other parts of the prison.”

Iranian opposition group, the National Council of Resistance of Iran (NCRI)/People’s Mujahedeen Organization of Iran (MEK) stated that the conditions in the prisoners’ new area were “unbearable.” The NCRI secretariat reported that, “Dozens of closed circuit cameras and sound surveillance devices have been installed to place even further pressure on prisoners, keep them under 24/7 control, and prevent any news about their conditions leaking out of the prison.” This is an issue of concern to the inmates. “During the renovation, 40 closed circuit cameras, and 64 listening devices were installed throughout the hall, even in bathrooms.”

Calling for international action in support of the prisoners, the NCRI declared, “Some of whom suffer from various diseases from years of imprisonment and torture.”

In fact, one of the protesting prisoners, Hassan Sadeghi, sentenced to 15 years for supporting the MEK, had been hospitalized for an eye injury said to have been caused by beatings from prison authorities. There are fears that he may lose his eyesight.

Abbas Jafari-Dolatabadi, Tehran’s prosecutor-general said last week that his message to the hunger strikers was that “these actions have failed, and the judiciary will not surrender.” Jafari-Dolatabadi has been under European Union sanctions since 2011 for human rights abuses.

On Monday, political prisoner Saeed Masouri, in a statement responding to Jafari-Dolatabadi’s comment, said the prisoners would never accept the “suppression and assaults.” He added, “In our 30th day of hunger strike, while we have lost our physical strength, we will never lose the will to die for not surrendering.”

Amnesty International’s Middle East and North Africa director Magdalena Mughrabi said, “The fact that detention conditions have become so poor that desperate prisoners feel they are forced to go on hunger strike to demand the most basic standards of human dignity is disgraceful and highlights the urgent need for reforms to Iran’s cruel prison system.” She continued, “These are people who shouldn’t even be behind bars in the first place, yet instead of being released from custody they are being punished further by being held in appalling conditions.”

Further, Amnesty called on the Iranian regime to allow international monitors to carry out independent, unannounced inspections of prisons across the country.

Saying it was “deeply concerned” about the prisoners’ situation, The British Parliamentary Committee for Iran Freedom, urged the British government and the U.N. human rights apparatus “to condemn the unacceptable treatment of political prisoners in Iran and to act for their immediate release.”

The U.N. special rapporteur, Jahangir, called on Tehran earlier this year to release “all political prisoners and prisoners of conscience so that the climate of fear is replaced by an atmosphere that creates confidence and hope.”

In Iran, the Innocent Is Never Free

The world has once again; found a reason to...

AP: The head of the International Atomic Energy Agency...