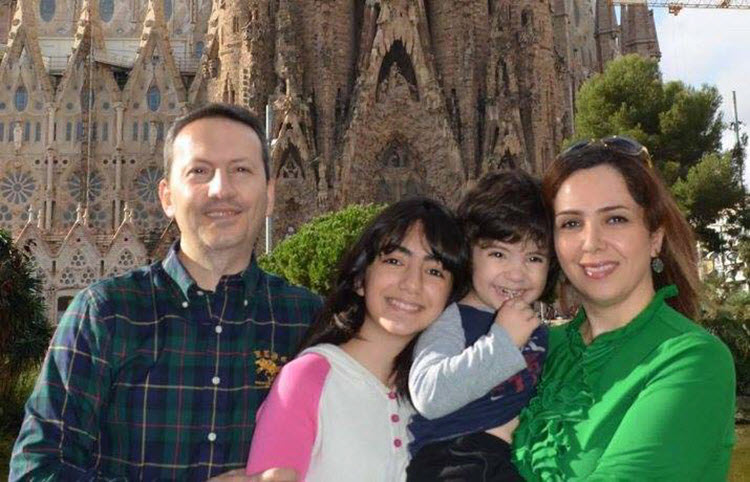 London, 1 Sep – An Iranian doctor specialising in medicine for disaster relief who was arrested by the Regime seventeen months ago has finally had his day in court.

Dr. Ahmad Reza Jalali, a physician and researcher who teaches at Vrije University Brussel (VUB) in Belgium, appeared before Revolutionary Court Judge Abolghasem Salavati, who has been cited by the European Union for violations of human rights, on Wednesday August 23.

Jalali, who was working to develop disaster relief training courses for the EU, was arrested for “collaborating with an enemy state” on April 24, 2016, after being invited to visit Tehran University.

He has always denied the charges.

His family were not told where he was until early May when he was finally allowed to call them.

After the trial, he was allowed to call his wife, Vida Mehran-Nia, to tell her about the trial and that he must appear in court once or twice more.

Mehran-Nia said: “Ahmad Reza had complained against the interrogators and had said that they had forced him to confess while in solitary confinement with threats and by putting him under mental pressure. Most of the questions in the court were about this. Ahmad Reza told the court: ‘I retract whatever I have signed because I signed under severe mental duress and because they threatened the life of my family. I do not accept any of the charges.’”

She revealed that her husband went on hunger strike for two separate periods of 45 and 43 days, when was threatened with execution sans trial for these bogus national security charges.

This reportedly made the Regime reopen the case.

The next appearance is scheduled for September, although it is not clear how long this trial will be dragged out for as the Regime has ways of prolonging the trial, including refusing two defence lawyers chosen by the Jalali family.

The reasons for rejection were, of course, stalling tactics by the Regime. They have no intention of holding a fair trial; they merely want Jalali to remain in prison as another one of their international hostages.

Although he is an Iranian citizen, he permanent residency in Sweden, where Mehran-Nia is seeking support for his case.

She said: “I have done everything that I could and have contacted everybody that I was able to, from the United Nations to the Swedish Embassy. I know that the universities with which Ahmad Reza worked are pursuing the matter at high levels and have even threatened to sever their scientific ties to Iran if he is not released as soon as possible. But I really do not know how to answer my five-year-old [son] who does not understand what is happening and only misses his father. [He and his 14-year-old sister] have not seen their father for 17 months. They have been badly traumatized. I do part-time work to pay for our livelihood. Then I have to take care of the children and follow up on Ahmad Reza’s case.”

Many people and organisations have pledged their support to Jalali’s case including Amnesty International, his colleagues at various European universities, and tens of thousands of people from around the world via a change.org petition.

Mehran-Nia said: “It has been such a long and difficult wait that I can no longer be optimistic. Of course, I am not pessimistic either. The efforts by universities and international organizations give me comfort. But there is something that I know for sure: If the court was a just court, Ahmad Reza would not be tried. He has not done anything to be charged with, or to bring about a conviction.”

Southern Iraq being drained of oil

UPI: The Iraqi government has accused neighboring Iran of...

Bush rules out meeting with Irans Ahmadinejad at UN