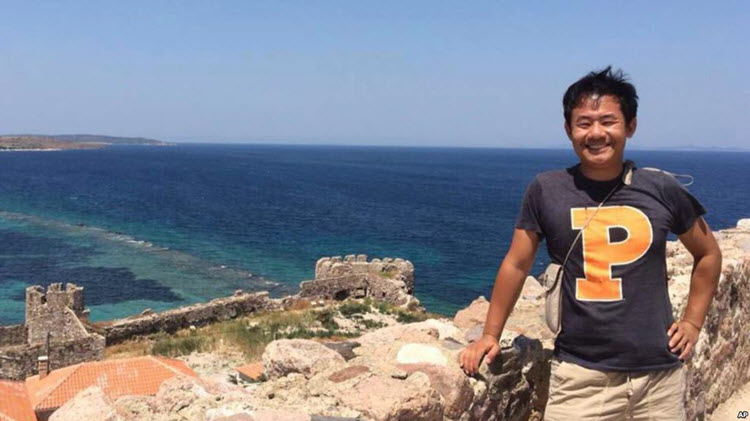 London, 8 Sep – Princeton University is reportedly working on a daily basis to free their doctoral student held hostage in Iran.

Xiyue Wang, a fourth-year history graduate student, travelled to Iran in 2016 to do research for his dissertation and was imprisoned by the Regime for spying.

Princeton University released a statement, which noted that Wang, 37, had been “unjustly imprisoned” and that the Regime had extorted Wang out of nearly $12,000.

He was sentenced to 10 years in prison on two counts of espionage in July, according to the Princeton Alumni Weekly. His appeal was rejected by the Iranian authorities in August.

Wang’s wife, Hua Qu, released a statement saying she was “devastated” that Wang’s appeal had been denied and concerned about his health.

In the statement, she said: “It is heartbreaking to hear [our 4-year-old son] constantly ask about his father’s return home.”

Wang only travelled to Iran in order to study Farsi and examine archival documents from the late 19th and early 20th centuries. He had received approval from the Iranian Regime for the research and had outlined for them all of his plans, including the libraries and archives he wanted to visit.

History professor Stephen Kotkin, Wang’s doctoral adviser, called Wang’s imprisonment “almost inexplicable” and stated that Wang had “no ulterior agenda”. He said that when Wang was arrested in August 2016, he had effectively completed his work in Iran and was planning to return to Princeton.

He said that much of Wang’s research into the governance practices of the late 19th century and early 20th century in predominantly Muslim regions involved scanning handwritten documents and published materials relating to areas including courts and other institutions, taxes, local officialdom, and the movement of people and goods.

He said: “These documents are 100 years old — there is no intelligence value in them.”

The Iranian Regime claimed that Princeton had “sent” Wang, a naturalized U.S. citizen who was born in Beijing, to “infiltrate” Iran and that Wang had connections to global intelligence agencies.

Princeton University has dismissed these allegations as “completely false”. They said that Wang “was not involved in any political activities or social activism; he was simply a scholar trying to gain access to materials he needed for his dissertation”.

A petition urging the Iranian Regime to release Wang has been signed by over 1,400 scholars from 37 countries, while The American Council on Education and 32 other higher education and research associations released a joint statement calling for his safe release.

Afghanistan asks Iran not to force out Afghan refugees