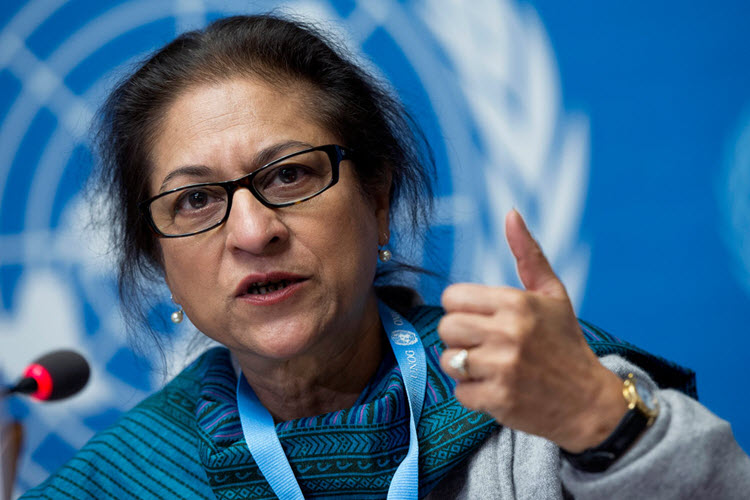 London, 25 Sep – Asma Jahangir, UN Special Rapporteur on human rights in Iran, gave an interview with Al Arabiya in which she described how the human rights situation in Iran as appalling across the board and that although she welcomed the Regime’s “tiny steps” on improvement, it has not gone far enough.

She said: “In every sector, starting from rule of law, starting from defective prosecution, denial of due process, to laws that are also discriminatory to people being discriminated against on religious and ethnic grounds, to torture, there are serious human rights violations in Iran that the Iranian government is beginning to look into and is beginning to take very tiny steps-very tiny- to address them. The fact that there is a charter for rights is an acknowledgement by the government that these problems do need to be addressed but they can’t drag them on for so long because people’s awareness in every part of the world is rising. You cannot tell people that you are not violating their rights when they can read, they can see and they can listen for themselves [to how things are done elsewhere].”

Jahangir said that she hopes that the campaign pledges of equality for all by Hassan Rouhani come to fruition soon but she has not seen much evidence of this yet. Any moves that have been made are also subject to almost instantaneous reversal unless they are enshrined in law.

Last year, the Iranian Regime released a non-binding charter on human rights in Iran, which Jahangir described as a promise to do better, but so far this has not improved the human rights situation in Iran.

Jahangir recently issued recommendations to the Regime to abolish inhumane treatment of its people, release prisoners of conscience, and reform the judicial system but she said that she does not believe that these will be implemented by the Regime.

She assessed, however, that real change in Iran would not come from outside forces, like the UN, but rather from the Iranian people themselves.

Jahangir praised the work of human rights defenders and journalists who are hated by the Iranian Regime and may be imprisoned or tortured or executed for their work, and said that she would never discourage them from using free speech, as is the right of every human on earth. She advised these human rights activists to band together to protect each other and challenge the Iranian Regime’s attacks.

On the situation of the political prisoners currently on hunger strike on Iran over their treatment by the Regime, Jahangir said that she has made several statements to the Regime about them and that she hopes they will soon listen.

She said: “There can be no tolerance for human rights violations that take place on a daily basis against people who simply want to have their rights asserted or those who fight for the rights of others.”