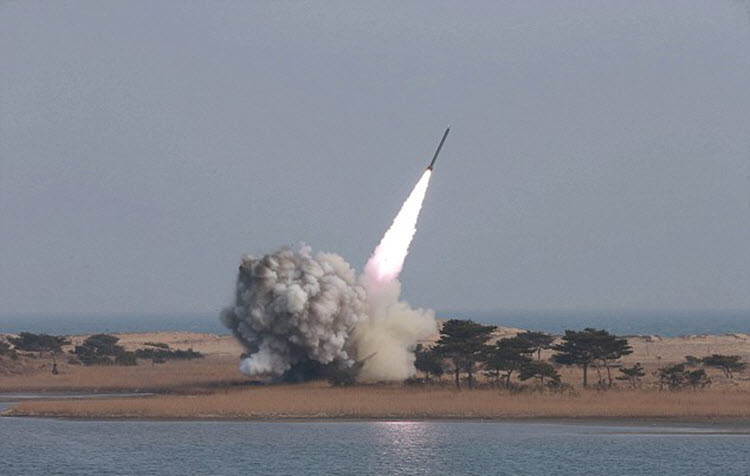 London, 25 Sep – Over the weekend, Donald Trump tweeted that Iran is collaborating with North Korea on missile technology and criticised the 2015 nuclear agreement between the US, Iran, and five other world powers.

He wrote: “Iran just test-fired a Ballistic Missile capable of reaching Israel. They are also working with North Korea. Not much of an agreement we have!”

This tweet was posted just hours after the Iranian Regime claimed to have tested the Khoramshahr, a new ballistic missile that is capable of reaching targets across the Middle East, including Israel.

The Khoramshahr, based on a North Korean missile, has a range of 1,250 miles and is similar to a missile tested in January which blew up after 600 miles. Testing it is a clear violation of the United Nations Security Council resolution 2231 which surrounds the nuclear deal, and calls on Iran “not to undertake any activity related to ballistic missiles designed to be capable of delivering nuclear weapons, including launches using such ballistic missile technology”.

It is believed that this test-launch was a direct challenge to Trump, following the US’s August bill that imposed fixed penalties on people or companies involved in Iran’s ballistic missile program and anyone doing business with them.

Shortly before the launch, it was reported that Iranian President Hassan Rouhani had defended the missile programme and claimed that it was used for defensive purposes. This seems unlikely considering previous missile launch was daubed with threats to Israel, but defensive or not, it’s still a violation of the nuclear agreement.

Of course, experts have long suspected that North Korea and Iran are collaborating on their ballistic and nuclear programmes.

CIA Director Mike Pompeo recently told Fox News: “[Iran would] certainly be someone who would be willing to pay [for that expertise].”

He continued: “The North Koreans have a long history of being proliferators and sharing their knowledge, their technology, and their capacities around the world. As North Korea continues to improve its ability to do longer-range missiles and to put nuclear weapons on those missiles, it is very unlikely if they get that capability that they wouldn’t share it with lots of folks.”

Trump has repeatedly threatened a tougher line on Iran, including pulling out of the nuclear deal, and many bipartisan experts believe that the US’s upcoming announcement on Iran policy will have ripple effects on North Korea.

However, if Trump pulls out of the Iran deal, that doesn’t mean that North Korea will be less likely to negotiate with the US.

James Carafano, a defence policy expert at the Heritage Foundation and member of the Trump transition team, called the notion “ridiculous”.

He said: “That’s an arms control argument that has nothing to do with the reality of North Korean and Iranian behaviour. North Korea never trusted us. They’ve already violated deals with us eight times. The regimes are so paranoid and know their grip on power is so tenuous, they believe that nuclear weapons are their ‘get out of jail free’ card.”

AFP: Documentation presented Monday to the governors of the...