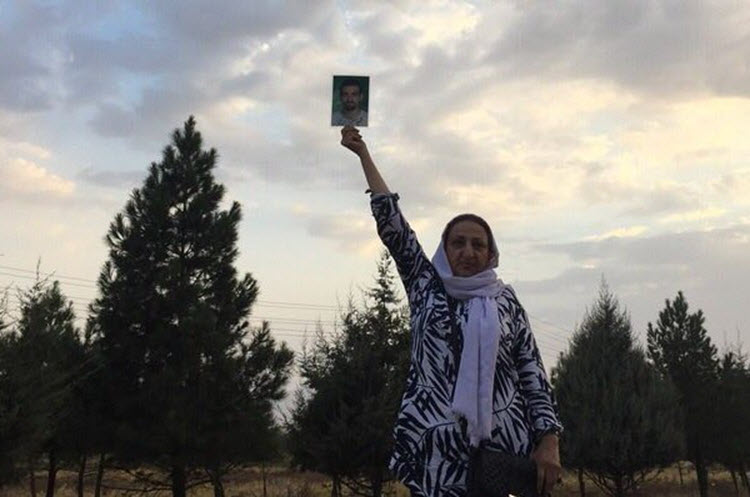 London, 6 Nov – The Iranian Regime has slapped the grieving mother of a murdered political activist with a year in jail, plus a ban on political activity, travelling abroad and social media membership, in order to silence her from speaking out about her son’s death.

Shahnaz Akmali, who lost her son Mostafa Karimbeigi during a 2009 political protest, has been sentenced for “propaganda against the state” by the 26th Branch of Tehran’s Revolutionary Court in order to stop her from seeking the truth about her son’s death, according to the International Campaign for Human Rights in Iran.

The propaganda charge is something that the Regime will often levy against people who have actually committed no crime in order to silence them, which generally means that the Regime is hiding something.

She also communicated with the media regarding the death of her son and other activists, and spoke to the families of other political prisoners.

Akmali was first arrested in February 2016 and she was held in the notorious Evin Prison for three weeks without access to a lawyer, before being released on a 100 million touman bail. Then, in July, it was revealed that her daughter received threats of having her house burnt down if the family did not stop talking to the press.

Still Akmali held a public remembrance vigil for her son, alongside mothers of other murdered political prisoners and dissidents.

The Regime note is their recent sentence against her reveals that in their view she has not been ‘rehabilitated’ because she has continued to speak out. Of course, she hasn’t been rehabilitated. You are rehabilitated when you stop taking drugs or shoplifting or engaging in violent attacks. You cannot recover from fighting for justice for the murder of your child.

Karimbeigi, 52, was shot and killed while peacefully protesting election fraud in the 2009 presidential elections which saw Mahmoud Ahmadinejad re-elected. His family were not allowed to bury him in Tehran; instead, having to choose a secluded, rural area.

Scores of protesters were slaughtered in the streets by the agents of the Regime, while thousands more were arrested and given heavy prison terms. Any demands for accountability surrounding the violence have been met with arrests for fear of igniting the ire of the people of Iran.

Los Angeles Times: Already under pressure from the new...