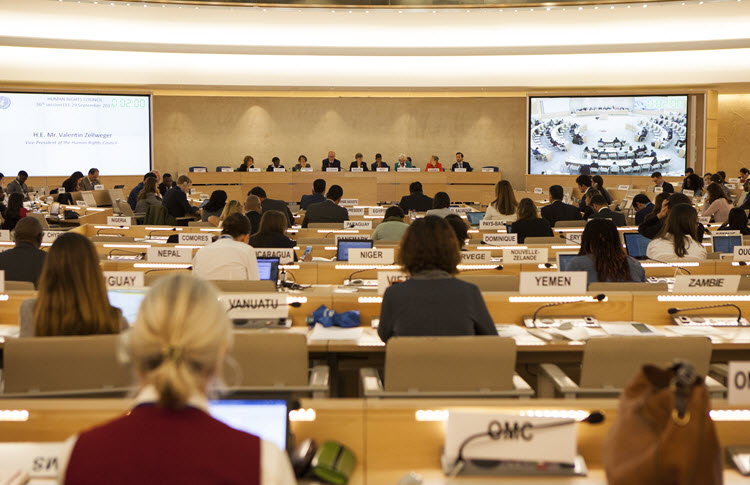 London, 18 Nov – The human rights situation in Iran continues to be of serious concern. It is reported that activists, journalists, and foreign nationals are harassed, arrested, mistreated, and even tortured and imprisoned for speaking against the regime.

The international community recognized this by passing the 64th resolution, adopted by the UN Third Committee, that condemns the human rights violations in Iran. The resolution was was praised by the National Council of Resistance of Iran (NCRI) President-elect Maryam Rajavi. She said that she sees it as another step by the international community toward addressing the needs of the Iranian people.

Highlighted in reports by the UN Secretary General and the UN Special Rapporteur on the situation of human rights in the Islamic Republic of Iran, is the 1988 massacre of 30,000 political prisoners. Justice for Victims of 1988 Massacre in Iran (JVMI) has also raised awareness for this atrocity, that saw the execution of thousands of prisoners, as was sanctioned by the Supreme Leader. The victims were buried in mass graves. The regime has attempted to ignore the event, and construction has begun on sites of potential mass graves.

Mrs. Rajavi spoke to this crime against humanity, “The best example of serious human rights violations in Iran is the massacre of political prisoners in 1988 in which all the clerical regime’s agencies and officials including Ali Khamenei, the president, the judiciary, the mullahs’ parliament, and the highest officials in charge of security and intelligence agencies were involved and complicit. They defend it and have so far remained immune from prosecution.

Therefore, the international community faces a great test in investigating this great crime against humanity and prosecuting its perpetrators.” She urged the UN to launch an investigation into the 1988 massacre.

The UN Third Committee stated that it has “serious concern at the alarmingly high frequency of the imposition and carrying-out of the death penalty… including the imposition of the death penalty against minors and persons who at the time of their offence were under the age of 18, and executions undertaken for crimes that do not qualify as the most serious crimes, on the basis of forced confessions” and called on the Iranian regime “to abolish, in law and in practice, public executions.”

More and more often, reports reveal that prisoners often suffer a lack of food and water. It is believed that they must purchase drinking water for themselves, and are frequently denied necessary medical treatment. Many protest by staging hunger strikes, but allege that they are placed in solitary confinement as punishment for this. Many prisoners claim that they are moved from their cells into high security blocks, where they are filmed and watched even when in the restrooms and showers.

The resolution also called for Iran to ensure that no one is subjected to torture or other cruel, inhuman or degrading treatment or punishment, in law or in practice.

The NCRI’S President-elect said, “The time has come for the international community and especially the UN Security Council to undertake effective and practical measures against the religious fascism ruling Iran for its flagrant and systematic violations of human rights in Iran, particularly the brutal executions that are carried out arbitrarily and en masse.”

The UN called for accountability within Iran for human rights violations, and an end to the impunity for such violations by the members of the judiciary and security agencies, as part of the resolution. However, many of the participants in The 1988 massacre are still active members of the Iranian government and even part of the current Presidential cabinet. The resolution is merely a first step — only real action will achieve change for the Iranian people.

Reuters: Iran did not attend a meeting on Afghanistan...

Sudanese military factory to be moved from capital