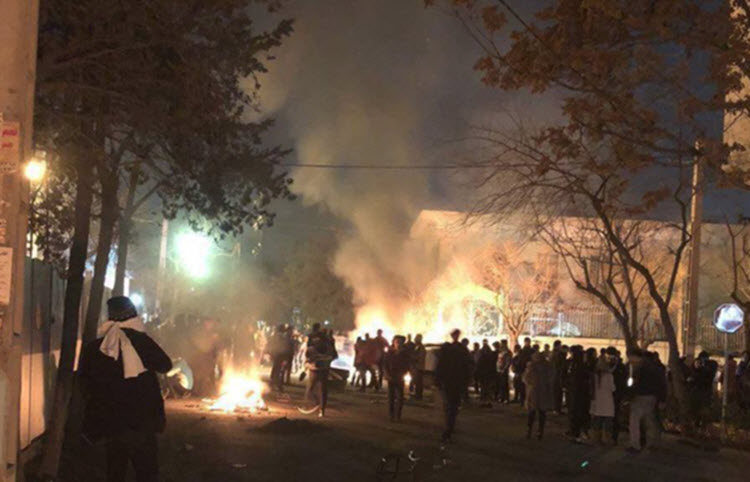 London, 22 Feb – Over 300 Sufi protesters were arrested during overnight clashes with the police in Tehran on Monday night.

The Sufi group Gonabadi, known locally as Gonabadi dervishes, held their protest in front of a police station in northern Tehran to demand the release of the members of their faith and the removal of security checkpoints around the house of their leader, Noor Ali Tabandeh.

When Iranian police tried to disperse the protestors, who were marching towards Tabandeh’s home, things turned violent and, according to police spokesperson Saeed Montazer Almehdi, five members of Iran’s so-called security forces were killed, including two members of the paramilitary Basij force.

A video circulating on Iranian social media claims to show the moment when cars ploughed into the security forces, but this video could not be independently verified.

The Sufi’s Majzooban Noor website reports that at least one protester was killed and several injured when the police opened fire into the crowd. It also says that the actual figure of Sufi detainees is much higher than reported, adding that several members were arrested at the airport.

Sufism is a denomination of Islam that has between two and five million followers in Iran, although there are no official statistics. Iran regards them as heretics and subjects them to intense and routine harassment.

Iran has been criticized often for its treatment of religious minorities.

Last year alone, the Iranian Sufis were a subject of concern for:

• A UN Special Rapporteur on Human Rights in Iran, who said that the Sufi “continue to face arbitrary arrest, harassment, and detention and are often accused of national security crimes”

• The US Commission on International Religious Freedom, who said in a report that Sufis are often targeted for not conforming to Iran’s interpretation of Islam and face horrific abuses, including attacks on their prayer centres and community cemeteries as well as harassment, arrests, and physical assaults.

Hemin Sayidi, a London-based Iranian expert, said that the Sufis’ clashes with Iran could be another example of nationwide anti-government protests that have resulted in at least 50 protester deaths and over 8000 arrests.

Sayidi said: “These protest movements, be it in the name of poverty or religious oppression, indicate that people are weary of the current oppressive rulers.”

This is not the first time that the Sufis and Iran have clashed over the religious minority’s rights and freedom. In both 2006 and 2007, the Iran’s decision to close a Sufi shrine led to protests by the Sufis and a crackdown by the government forces.

Reuters: Iran will defeat an enemy "conspiracy" against its...