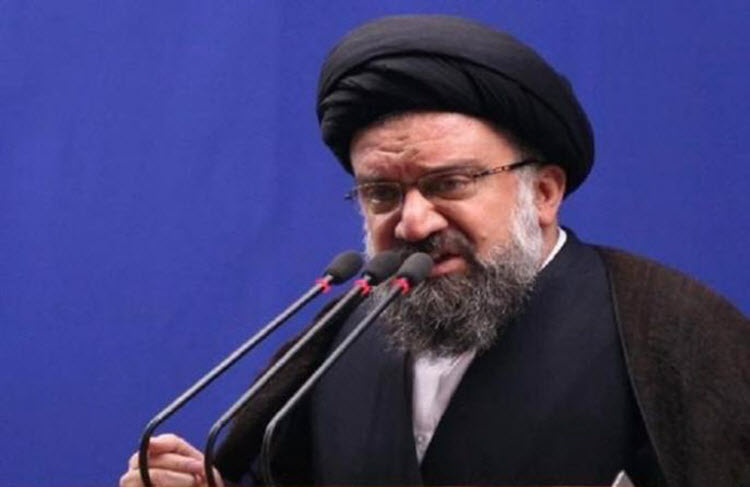 London, 05 Mar – The leaders of Friday prayers in Tehran has slammed the Iranian Regime for what they saw as a “soft” approach to the feminist anti- obligatory hijab protests, that have formed part of the nationwide anti-regime protests that have been going on since early January.

This could be due to promises made by Rouhani during his re-election campaign about decreasing pressure on women and removing discrimination against them.

However, it is important to remember that Rouhani is not a moderate and that, even if he meant the things that he said, he does not have the power to change things as all power in Iran is in the hands of Supreme Leader Ali Khamenei.

10 years in prison and violence in the streets

It is also worth noting that this “soft approach” resulted in 30 protesters being detained and likely facing 10 years in prison, as the Iranian judiciary aims to discourage other women from following their lead and joining the protests.

In a video that has now gone viral, an unnamed woman is shown being pushed from her podium to the ground by an Iranian policeman who then arrests her.

Vice-President Masuma Ibtikar weighed in on the anti-obligatory hijab protests, following the uproar from that video, and claimed that the Iranian Regime approves the use of power to impose hijab in public places.He did, at least, admit that the law shouldn’t be imposed by physical force.

Which part of that is the soft approach? Is the hard approach shooting females not wearing the hijab on site?

On a related note, 45 members of the EU have demanded in an open letter that the EU’s high representative for foreign affairs Federica Mogherini publically support those women detained because of what the Iranian Regime calls improper hijab and call for their immediate and unconditional release.

This nationwide people’s protest against the Iranian Regime that began in December over increased prices and a leaked budget that slashed subsidies for the poor.

The budget, for the financial year March 2018-2019, also increased spending on the country’s military and suppressive security forces, including the Revolutionary Guards Corps (IRGC).

Despite having two months of nationwide protests, the Regime did not drastically change the budget.

Kerry Meeting With Iranian FM With Deadline for Nuclear Deal

Reuters: Taiwan said on Monday it would investigate reports...