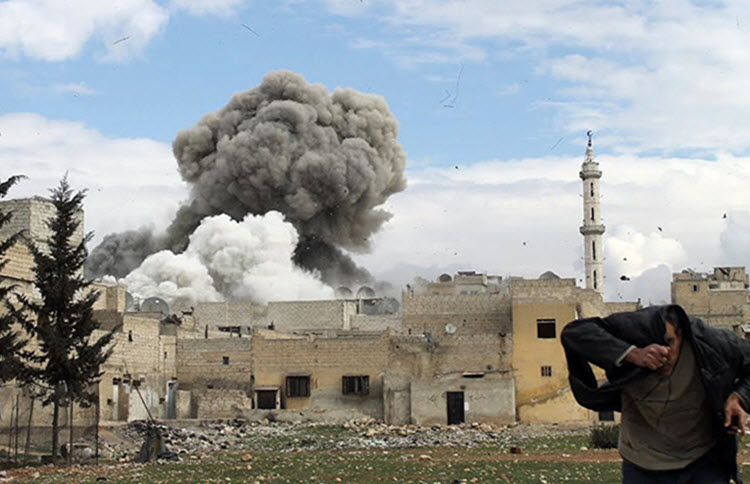 London, 05 Mar – The White House has condemned the Syrian slaughter inside Eastern Ghouta, saying in a statement released on Sunday that the Syria, which was backed by the Iran and Russia, are killing “innocent civilians under the false auspices of counterterrorism operations.”

Eastern Ghouta, an area held by the Syrian Resistance forces, has been under siege from the Syria since 2013 and daily bombardments for months now.

Over the past two weeks, over 600 civilians from the city have been killed; a huge percentage of the 400,000 residents. On top of that, the United Nations reports that 15,000 people have been forced to leave their homes since January, with the majority staying in shelters and basements around Ghouta.

Meanwhile deliveries of aid have been increasingly restricted, with the last one arriving to help 7,000 people on February 14 in Nashabiyah, an area now under Syria control.

The Axis forces, which is how the Iran describes itself, Russia, and Syria, accused the rebels of stopping civilians from leaving, but the Syrian Resistance explain that the Syria is trying to forcibly displace the population and called on Assad, Iran, and Russia to implement a full cease-fire adopted by the U.N. Security Council.

The Axis forces see these attacks as evidence that the Syria and Assad will emerge victorious from the seven-year civil war, in which the Syria has used chemical weapons continually against civilians in rebel-held areas.

Iran has been involved in the Syrian civil war since its start in 2011, desperately worried that if the Syrian dictatorship is allowed to fall, the Iranian one will be next. Thus, Iran has deployed its proxy forces, including the terrorist Hezbollah, to fight in Syria on Assad’s behalf.

Iran is also working to turn Syrian into an Iranian vassal state, in much the same way as it did to Iraq, because it wants to expand its Shiite corridor across the Middle East in order to transport weapons, fighters, and money to its various proxy groups with much less oversight.

Iran’s Quds Force has also established a new permanent military base, just outside Damascus, to store ballistic missiles that it can fire at Israel, in violation of the UN resolution that enshrines the 2015 Iranian nuclear deal.

Gen. Joseph L. Votel, head of U.S. Central Command, said during a House Armed Services Committee that Iran has increased the number and quality of ballistic missiles it was deploying to the region, since the deal was agreed.