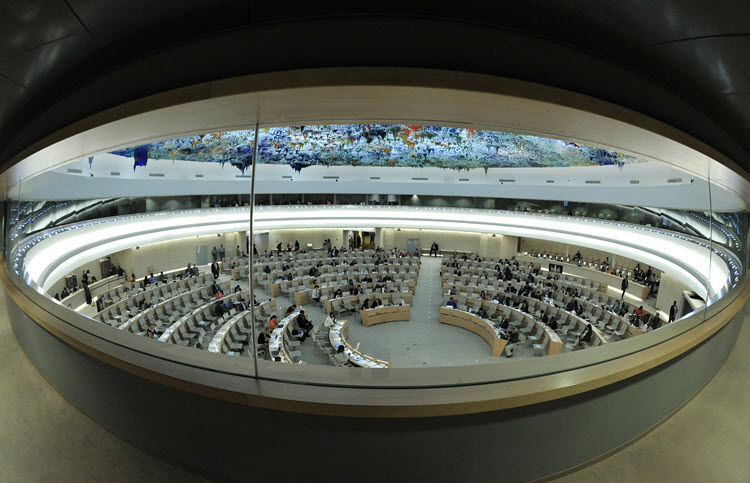 London, 26 Mar – The United Nation’s Human Rights Council has adopted a resolution to extend the mandate of a Special Rapporteur to monitor the situation of human rights in Iran, according to Iran’s state-run news agency IRNA.

IRNA reported: “Adopted along with five other resolutions in a meeting in Geneva on Friday, the resolution on Iran extended by a period of one year the mandate of the Special Rapporteur on the situation of human rights in Iran.”

This means that a Special Rapporteur will be appointed to submit a report on human rights under Iran to the UNHRC during its 40th session and to the UN General Assembly at its 73rd session.

The resolution passed by a vote of 21 to 7, with 19 abstentions. Countries which voted against the resolution include:

• China, which is little surprise as China also wants to keep the Iranian nuclear deal alive.

• Iraq, which is little surprise as Iran has great control over the Iraqi government.

Mohsen Naziri Asl, Iran’s representative to the UNHRC, called the resolution “spiteful” and “politically motivated”. This is not a surprising reaction, but it is untrue. This resolution was passed because of massive flaws in Iran’s human rights record.

The late Asma Jahangir, a prominent lawyer who served at the UN Special Rapporteur on the situation of human rights in Iran until her death in February, presented a critical report to the UNHRC in March 2017 which agreed that there were many problems regarding human rights in Iran.

In Jahangir’s latest report, released posthumously in March 2018, not much had changed and she also voiced concern about the crackdown on protesters by Iran, which had become more pronounced since the nationwide anti-government protests began in December.

Jahangir criticized Iran for a crackdown on freedom of expression, restrictions on access to information, and the systematic abuse of detainees, including torture and rape.

She wrote: “Despite assurances from the government, improvements are either not forthcoming or are being implemented very slowly and in piecemeal.”

Jahangir was the second Special Rapporteur on the situation of human rights in Iran since the re-establishment of the mandate by the UNHRC. She succeeded Ahmad Shahid, a Maldivian diplomat.

Iran has repeatedly denied the UN Special Rapporteurs visas to travel to Iran, which is suspicious in itself. This means that the situation is likely even worse than Jahangir has been able to report.

AFP: Iran could develop a nuclear bomb in about...