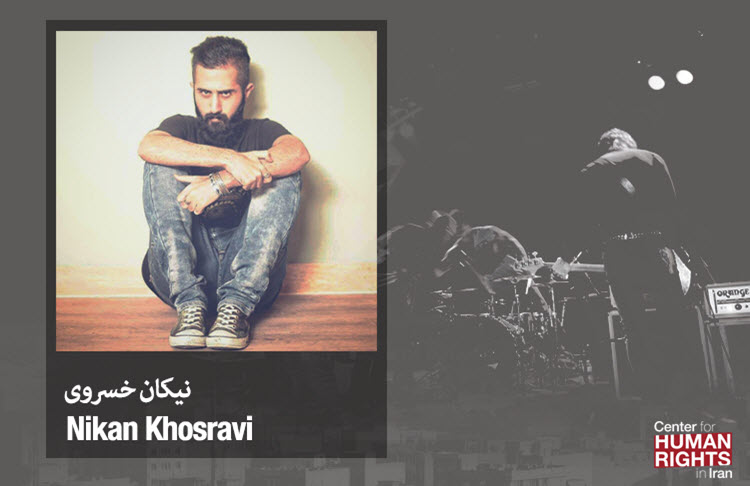 London, 01 Apr – To avoid being imprisoned for six years for producing metal music, “Confession” band member Nikan Khosravi, left Iran for Turkey on March 29th, according to
the Center for Human Rights in Iran (CHRI).

He told the CHRI, “The interrogators had translated my English lyrics [into Farsi] verse by verse and were asking questions about this and that word and told me I was a Satan worshipper and didn’t believe in God.” Khosravi added,“They really thought I was a bad person. They asked about who was giving me financial support and what were my connections.”

The music studio band was using was built by Khosravi, in his bedroom at his family’s home in Tehran.

“They said my lyrics were political but I was 21 and wasn’t interested in and didn’t understand politics,” he said. “But when you live in Iran, from the day you are born, politics get mixed into your daily life and that’s why it entered my lyrics,” said 23 year old Khosravi.

On November 9, 2015, days after the release of their second album, the Islamic Revolutionary Guard Corps (IRGC), and accused of producing “satanic” music arrested “In Pursuit Of Dreams”, he and fellow band member Arash Ilkhani, 24. Both men had been studying English for translation purposes at nearby Roudehen Azad Islamic University.

Artists in Iran — painters, filmmakers, photographers, writers, and many others — must receive permission from the Ministry of Culture and Islamic Guidance to publish or promote their work in Iran. Without this permit, those who publicize their work can be arrested and imprisoned on several charges.

Judge Mohammad Moghisseh of Branch 28 of the Revolutionary Court in Tehran sentenced Khosravi and Ilkhani to six years in prison each, on March 17, 2017. Their crime was “insulting the sacred” and “propaganda against the state”
Currently, Ilkhani is awaiting the Appeals Court’s ruling in Iran, but soon after the preliminary verdict, Khosravi left the country and is seeking asylum elsewhere through the United Nations High Commissioner for Refugees (UNHCR) in Turkey.

“I’m 24-years old. I have been living with fear and anxiety since our arrest,” Khosravi said. “After the court issued its verdict, I realized that I could go to prison for six years, or maybe a little less if the sentence got reduced on appeal, so I decided to leave Iran.”

Khosravi described his arrest. “Seven or eight agents suddenly raided our home and started searching everywhere, including my room. They confiscated some of my belongings and then handcuffed me and took me with them.”

“They told me I was accused of insulting the prophet. They also arrested Arash [Ilkhani] on the street on his way home from university. We were interrogated separately by the IRGC for 10 days in Ward 2-An in Evin Prison. I was interrogated by four or five agents.” He continued, “For a long time I thought I was going to be executed but with the help of my lawyer, the interrogators accepted that my lyrics did not contain anything insulting toward the prophet or his disciples.” Khosravi added, “I just had one song that was about the nature of God.”

In late November 2015, after posting bail set at 100 million tomans (approximately $26,500 USD), Khosravi was released from detention. In February 2016, he was arrested again and held for another two months. His trial was held during two sessions on September 18th and December 26th, 2016.

“During the trial, the first question the judge asked was when I had started my alleged activities against the state. It was as if he was certain I had engaged in anti-state activities,” Khosravi said. “I told him I didn’t care about the state. He asked why I had written and sang such lyrics.”

“During the second court session, Judge Moghisseh again asked what my intention was in singing such lyrics and to explain my connections.” He added, “The session did not last more than 15 minutes.”

Premiums Rise for Ships Loading From Iran as US Sanctions Loom