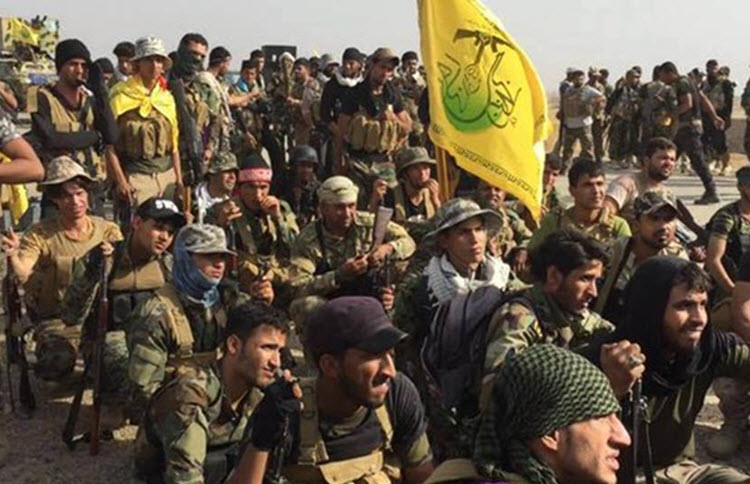 London, 01 Apr – Harakat Hezbollah al-Nujaba, or ‘al-Nujaba’, a Shia jihadist group loyal to Supreme Leader Ayatollah Khamenei, is reported to have built a 10,000-strong force operational across several brigades in Iraq and Syria — considerable influence in Iran’s proxy wars in Syria and Iraq, that strengthens Shia power in the region.

In recent months the group has warned American troops not to attack Shia groups in the region.

Al-Nujaba brigades arrived in Syria 5 years ago, and in that time, they have played an instrumental role in securing a military advantage for President Bashar al-Asad.

Parliamentary elections in Iraq are held in May, and candidates with ties to al-Nujaba may secure the group great power in Iraq if they are elected.

An Islamic Jihadist group, al-Nujaba follows the Velayat-e Faqih (Guardianship of the Islamic Jurist), the founding principle of the Islamic Republic of Iran. It is modeled after the Lebanese Hezbollah group, and is loyal to Iran’s Supreme Leader Ali Khamenei.

Although based in Iraq, al-Nujaba considers itself the defender of the House of Islam. Its self-proclaimed goal is to prepare the ground for the return of the Hidden Imam, or the Shia Messiah, as well as to confront the US and Israel.

Al-Nujaba leaders are proud of their close relations with the Islamic Republic and consider it their main supporter. They own the Tehran based Arabic-language TV channel, Al-Kawthar.

Their website is clear about its links with Iran. “I have to confess that the Islamic Republic supports us in every aspect,” it quotes Akram al-Kaabi as saying, “especially in armaments and the training of our forces…We always consider ourselves a force following the great commander of Islam, Haj Ghasem Soleimani, and consult with him in going forward. Considering his direct relations with [Ayatollah Khamenei], we see him as the representative of Islam and the Muslims.”

Al-Nujaba fighters were estimated at 10,000, in 2017. They participated in the fight for Aleppo and established a military training center in the Aleppo area. General Soleimani visited their academy in 2016. Following his visit, the the security of Aleppo’s airport was assigned by the Syrian government to al-Nujaba’s forces.

Al-Nujaba has escalated its threats against American forces and has warned them against attacking Shia militant groups in Iraq and Syria, over the last few months. It announced its opposition to the presence of US forces in Iraq, and demanded the replacement of American military advisors with those from the Popular Mobilization Forces and the Iranian Qods force by the Iraqi government.

During a visit to Beirut in February, in a live broadcast from the studios of Hezbollah’s al-Manar TV, Akram al-Kaabi stated that the role of the Arab/American coalition in Iraq was “destructive” and “mischievous” and warned that his group would attack American forces if they continued with their actions.

The candidates al-Nujaba supports campaign under the umbrella of the Fatah Alliance led by Hadi Ameri, who has close ties to General Soleimani. He may become the next Iraqi prime minister, which would give Iran considerable control over the affairs of the country.

Reuters: Iran has reached agreements with European refiners to...

Forbes: Much of the most shocking evidence of America’s...