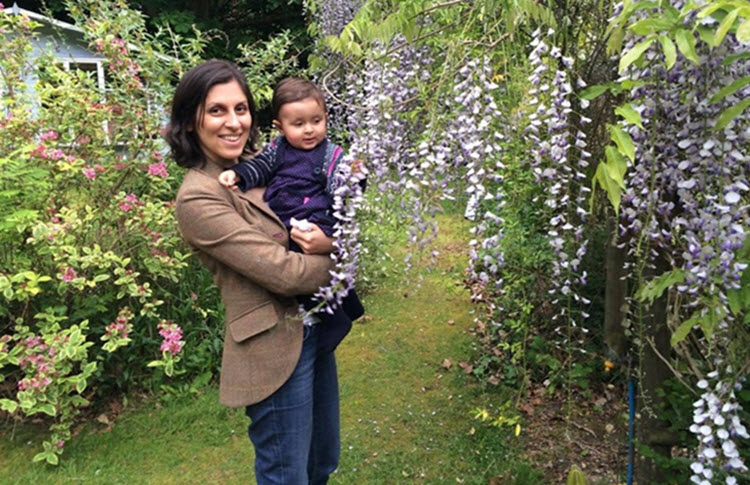 London, 12 July – Nazanin Zaghari-Ratcliffe, the British-Iranian dual citizen that was detained in Iran while on a visit to her family in April 2016, remains in jail. She was sentenced to five years’ imprisonment for “plotting to topple the Iranian dictators”.

She has unjustly been held for more than 800 days, simply for wanting to see her family for Iranian New Year. Her infant daughter was taken away from her and has been living with Nazanin’s mother in Iran.

Nazanin’s husband, Richard Ratcliffe, another victim of the Iranian rulers is being denied precious time with his daughter.

Nazanin is a charity worker that has been caught in the middle of what now seems to be a diplomatic dispute. Richard Ratcliffe has said that his wife was told that she has not committed a crime, but that she is being detained because of overdue UK government debt to Iran.

Last year, British Foreign Secretary Boris Johnson mis-spoke about the case and made comments that were used against Nazanin by Iranian authorities. Although this was a major blow to the family, some good did come out of it. Johnson immediately acted on his mistake and Nazanin’s case became a priority for him. He even travelled to Iran to bring up the case and promised to do all that he could.

However, Nazanin’s family are slowing losing hope now that Johnson has resigned and they fear that her case will no longer be pursued.

In an article for the Guardian, Mr. Ratcliffe explained that the family is waiting to see if Nazanin can be given diplomatic protection which would mean that the Iranian government would be put under more pressure.

He also said that the new Foreign Secretary Jeremy Hunt has been well-informed of the situation and has given the family much support and encouragement in the past. Mr. Ratcliffe is well aware that his wife’s case will not be the first priority on Jeremy Hunt’s agenda, but he hopes that he will dedicate his time to it in the next few days.

Mr. Ratcliffe said that he wants the new Foreign Secretary to make a “clear statement” about his commitment to the release of his wife and the other British citizens that have been detained in Iran. He also said that it is “a nonsense” that the British embassy has not been allowed to check that Nazanin is ok.

Finally, he said: “I still have a pile of painted stones in our flat made to symbolise Johnson’s vow to leave ‘no stone unturned”. Gabriella likes to look at them on Skype. I have promised Nazanin that I will give Jeremy Hunt one when we meet, as a reminder of the promises he inherits with the job.”

Nazanin is just one of several British citizens that are being held on bogus charges in Iran. There are horrifying reports about the abuse and torture that they endure during their detention and details about their arrest and sentencing are never clear. It is time these practices end once and for all.

By Jubin Katiraie On Friday 15th November, it was...

New York Times: A day after Iran declared that it...