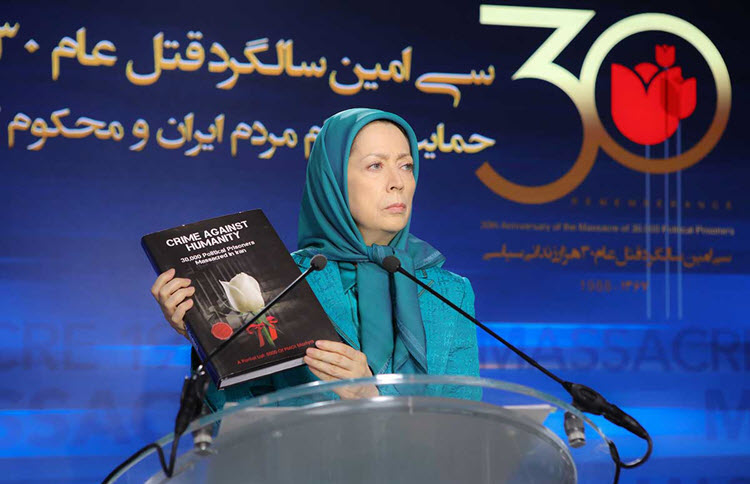 London, 27 August – On Saturday 25th October, an international assembly marking the 30th anniversary of the 1988 massacre in Iran was held in dozens of cities across the world. Mrs. Maryam Rajavi, leader of the Iranian Resistance, spoke about the crime against humanity that saw more than 30,000 political prisoners executed during the summer of 1988.

Mrs. Rajavi spoke about the PMOI prisoners that were “ruthlessly sentenced to death” by Supreme Leader Khomenei for standing up for freedom and against the destruction of Iran. They were killed for their beliefs and described it as a catastrophe. This is what the regime is all about, she emphasised. Mrs. Rajavi pointed out that this has not changed and regime officials are still trying to cover up the massacre to this day. Three decades later the Resistance and the “forces of overthrow” in Iran are still working against the regime’s ideology.

Mrs. Rajavi also pointed out that terrorism is inherent to the Iranian regime and its criminal network has spread misinformation about the Iranian Resistance for decades. But she also affirmed that the regime is incapable of putting an end to the Resistance no matter how much it tries.

She ended her speech by saying that impunity must end now. 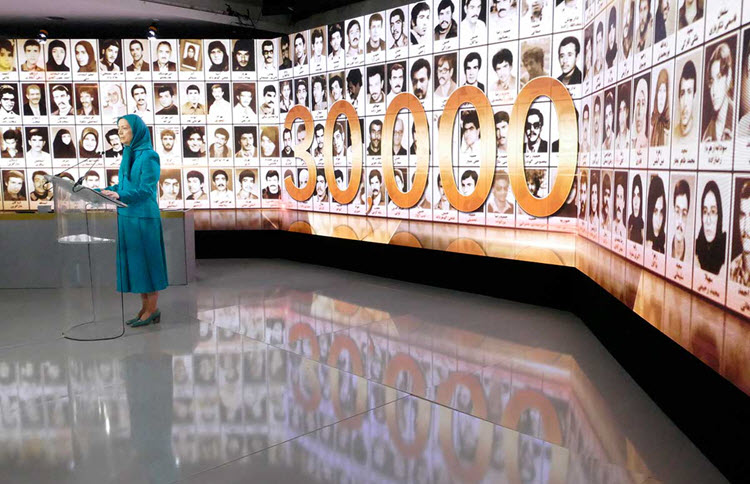 Patrick Kennedy, former U.S. Congressman and the founder of America’s Kennedy Foundation said that the 1988 massacre is a human rights issue and this is why people from all over the world are participating in this rally. He said we must never forget the 30,000 people that were executed. He emphasised that the crime happened in modern times so it is essential for the international community to stand up for human rights. He declared that this is not an Iranian cause, stating that it is rather “a universal cause”. These people died for freedom in Iran and now on the 30th anniversary of the massacre we see a new generation of Iranians in the country willing to stand for freedom, equality, human rights, etc. He applauded and commended them for their courage. 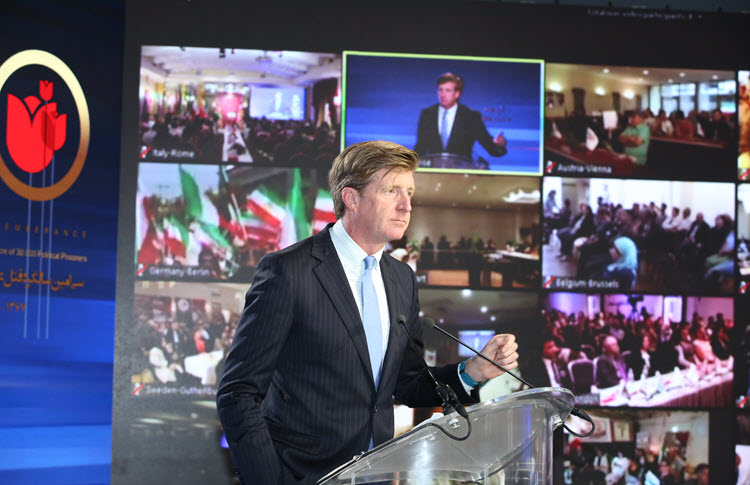 Also speaking from Paris, French politician and the Mayor of First arrondissement of Paris Jean Francois Legaret affirmed that there is widespread support for the Resistance movement and said that he wants this day to be a positive one for the people of Iran. 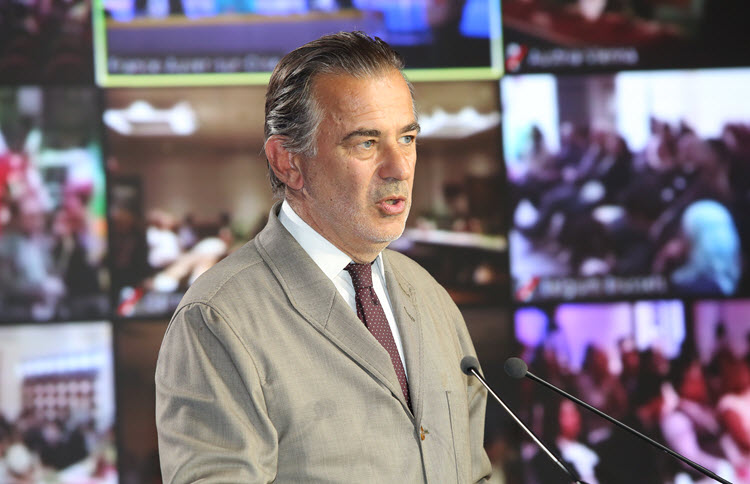 Ms. Farideh Goudarzi, witness to the crimes in Iran, spoke in Berlin about her time being imprisoned in Iran and about her family members that were executed by the regime. She gave a very harrowing account of the mistreatment of political prisoners and their families.

Ms. Naghmeh Rajabi, spokesperson of Iranian communities in the United Kingdom, spoke about the regime’s misinformation campaign to discredit the Iranian Resistance. Two of her aunts were killed by the Iranian regime. Also in London, Ms. Farzaneh Majidi spoke about the experience of having five members of her family executed by Iranian regime. She thanked the martyrs for their commitment and dignity and spoke about how her brother was only 16-years-old when he was executed. She called on the EU, the United Kingdom, the United States and all governments to condemn the massacre as a crime against humanity and to set up an independent enquiry and bring the perpetrators to international court. Speaking on behalf of Iranian youth, Mr. Omid Ebrahimi affirmed the support of young Iranians for the Resistance and for Mrs. Maryam Rajavi.

In Stockholm, Mr. Dawood Rahbar, spokesperson for Iranian communities in Sweden, said that the 1988 massacre is the biggest crime against humanity after World War II. He also suggested that all Iranian embassies in Europe should be shut. Also in Sweden, Mr. Nasrollah Marandi, a witness of a number of the 1988 execution during his 10-year stint in prison, said he is looking forward to the day in which he can give evidence in international court.

Speaking in Amsterdam, Ms. Raha Heshmati explained that her mother was arrested in 1981 and spent three years in prison because of her political and human rights activities. She said that the Resistance will not submit to the Iranian regime and it will not rest until justice has been served.

Mr. Behrouz Omid called on Norway not to ignore the suffering of the people of Iran. From Oslo, he declared support for the Resistance and emphasised that despite the execution of 30,000 people, the Resistance has never given up.

Ms. Shahnaz Gharacheh spoke in Toronto and condemned the Iranian regime’s attempt to carry out a terrorist attack at the “Free Iran” gathering in Paris on 30th June this year. She also praised Mrs. Rajavi for her leadership and her 10-point plan for a future free Iran.

In Brussels, Mr. Mahmoud Nobari, described Khomenei as an enemy of humanity. Speaking on behalf of the supporters of the NCRI in Belgium, he said that the PMOI have shown the world that they are capable of leading a democratic Iran. It is the only group that has successfully overcome all the hurdles that it has been faced with.

In Paris, Bishop Jacques Gaillot made it very clear that the martyrs have not died in vain because a new generation is rising up against the regime. “No one can prevent the fate of this nation,” he said. Mrs. Anissa Boumedienne, former First Lady of Algeria, also speaking in Paris, said that the role of the Resistance is so important in the struggle for freedom.

From Italy, Mr. Esmail Mohaddes highlighted the role of the martyrs in paving the way for the continued Resistance. Speaking in Bern, Ms. Neda Emami said that the Iranian regime is in a deadlock and it cannot survive.

In Gothenburg, Ms. Soheila Dashti, speaking on behalf of the Iranian community in Sweden, said that censorship at the time of the 1988 massacre prevented little more than the families of victims from knowing about the massacre at the time.

Ms. Vahideh Khorramroudi, spokesperson of Iranian communities in Canada, spoke about the inspiration of the heroes that stood up for the freedom of the Iranian people. She said that the people, especially the women, that were executed in 1988 brought the regime to its knees through their unwillingness to denounce their affiliation to the Iranian opposition. Mr. Ahmad Hassani also spoke in Canada about this brother that was executed in 1988. He paid tribute to those that remained firm against the regime’s suppression. He too called the martyrs heroes.

In Denmark, Mr. Manouchehr Forouzandeh described the Iranian regime as the enemy of the people because it has taken millions of dollars and plundered it on wars and conflicts across the Middle East instead of spending it on the people at home.

Mr. Mohammad Emami, the spokesperson in Romania, recounted his personal journey with the Resistance and paid tribute to his friends that were executed by the regime. He affirmed the support of Romania in the quest for freedom in Iran and said that numerous parliamentarians and Senate members from his country support the Resistance.

In Vienna, Ms. Minoo Mirkhani, condemned the Iranian regime for taking advantage of the European policy of appeasement and highlighted that an Iranian diplomat based in Vienna was involved in the plot against the NCRI’s Free Iran gathering.

Ms. Fakhri Shirazi, speaking from Frankfort on behalf of the Iranian communities in Germany, said that terrorism is inherent to the regime. She also pointed out that it is weaker and more vulnerable than it ever has been and that it why it is targeting the Resistance. 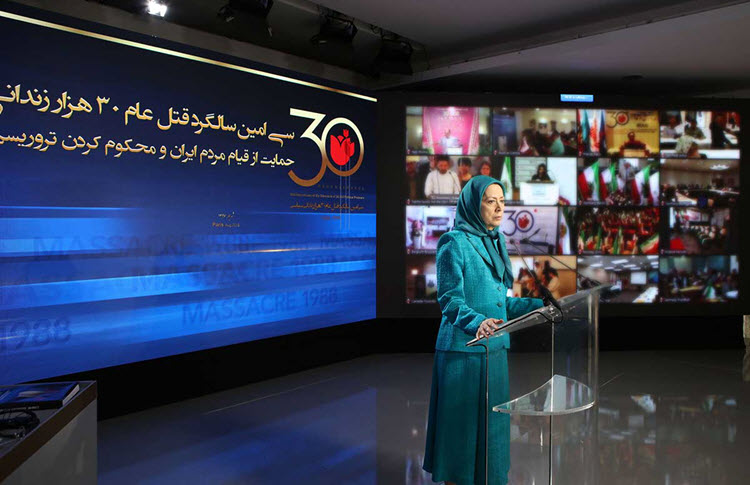 To end the event, Mrs. Rajavi thanked all of the distinguished speakers and witnesses for their valuable participation and testimonies from all countries. She highlighted that it clearly demonstrates the strength, determination, commitment and persistence of the Resistance.