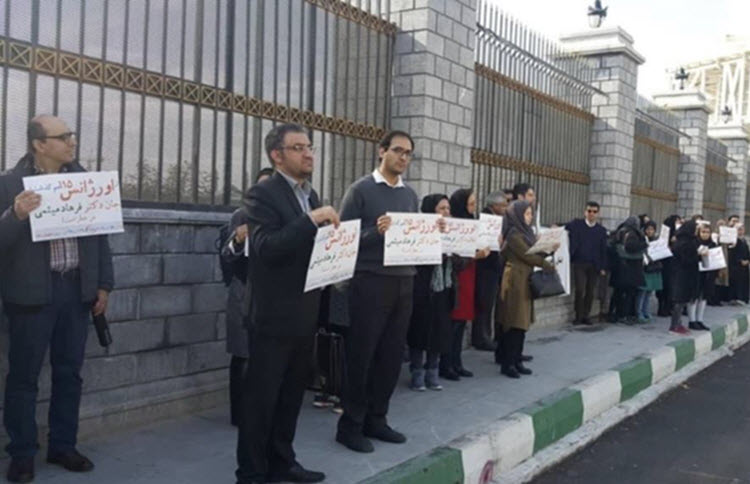 London, 28 Nov – Demanding medical treatment their detained colleague, a human rights activist who has been on a hunger strike for months, a group of Iranian doctors protested outside the country’s parliament.

Images of the doctors holding signs outside the parliament building in support of activist Farhad Meysami began to circulate on Monday. The lawyer who represents Meysami, Mohammad Moghimi, said in a phone interview that the protest began on Monday morning.

Meysami, a physician in his late 40s, was arrested by Iranian security forces at his office on July 31st. Books that are believed to be illegal, and badges with protest slogans regarding Iran’s policy of forcing women to veil themselves or wear the hijab in public, were discovered.

According to rights groups, Meysami can be charged with national security offenses, including encouraging women to remove their headscarves in public.

They also claim that as a means of protesting his detention in Tehran’s Evin Prison, he began refusing food on August 1st. Photos show a group of more than 30 doctors and their supporters holding signs calling for Meysami to be taken to an emergency room at Monday’s protest. Additionally, they want the hospital to which Meysami is transferred to be well-equipped.

Iranian reformist newspaper Etemaad Online reported on Monday that protesters and other Iranian doctors sent an open letter to Iranian parliament speaker Ali Larijani, reiterating their demands that Meysami be hospitalized, and voicing their concerns about their colleague’s health. According to Etemaad, some 400 doctors wrote to Larijani, explaining that Meysami’s weight had dropped from 78 to 44 kilograms as a result of the hunger strike, which they said “continues to this day.” They added that Meysami’s weight loss has been accompanied by “numerous physical and psychological problems” that constitute a medical “emergency.” They told Larijani, “Our religious and professional ethics compel us to ask you to instruct the relevant authorities to transfer Meysami to a specialized hospital,” and warned, “any unfortunate development for Meysami could become a pretext for criticism of Iran by its foreign enemies.”

Meysami’s hunger strike is believed to also protest government harassment of other activists, including his friend Reza Khandan and his wife, the prominent human rights lawyer Nasrin Sotoudeh. Khandan was arrested in September after he campaigned publicly for the release of his wife, who was imprisoned in June. The couple were charged with national security offenses for their support of Iranian women and the public protests against the nation’s compulsory hijab law.

Reuters: Saudi Arabia has taken a first step to...

Reuters: Iran will give a "tooth-breaking" response to a...