Despite Threats, Strikes in Iran Continue 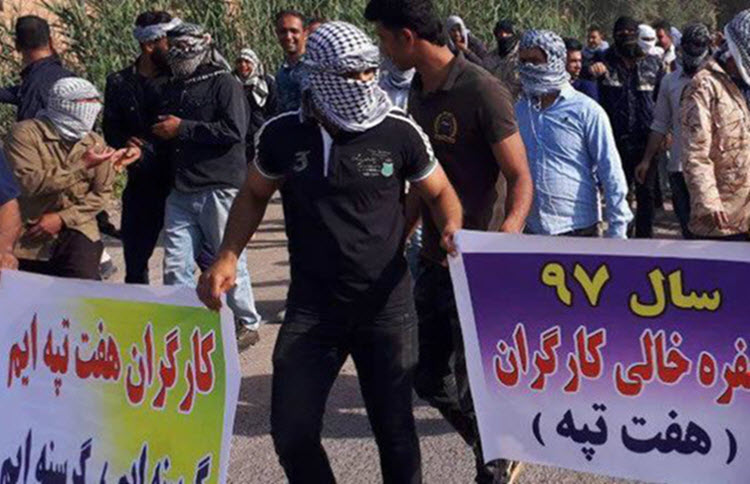 London, 29 Nov – The strike at the Haft-Tappeh Sugarcane Mill in southeastern Iran is now entering its fourth consecutive week, with workers demanding long-overdue wages, that the mill is re-nationalised, and that the two activists still being held over the strike be released immediately and unconditionally.

Esmaeil Bakhshi, the representative of the striking workers, and Sepideh Qolian, a young journalist and civil rights activist, were both arrested on November 18, alongside several of the protesters. By November 22, the arrested workers had been released, but Bakhshi and Qolian were charged with “security crimes” because of their role in the protests. It’s worth noting that vague security charges are often levelled against protesters in Iran because there is no real crime to charge them with.

Earlier this week, the head of Iran Judiciary told the workers not to create “disorder”, even accusing them of being used by “the enemy”, but in a show of defiance, workers turned up in larger numbers on Tuesday to protest and chant anti-Mullahs slogans. While the Ministry of Cooperatives, Labor, and Social Welfare’s representative Karim Yavari urged strikers to return to work and improve relations with the mill’s owners.

The mill’s main owner and manager, Omid Assadbeigi, also published a video message calling for the strike to end, which is particularly strange, considering that several judicial and governmental authorities have given conflicting accounts about the disappearance of the main owner and this is the first time that Assadbeigi has been named as the owner.

The mill, located in Shush, Khuzestan province, is the only factory of its kind in Iran. It was incredibly lucrative until it was sold to a private buyer two years ago. The workers are accusing the owners of gross mismanagement and demanding that the factory either be renationalised or managed by the workers.

Meanwhile, in Ahvaz, steelworkers gathered outside the governor’s office on November 25 to demand overdue wages, improved workplace safety, and fresh investment, highlighting that mismanagement and lack of capital have left many productions lines idle. They were reportedly attacked by riot police as they attempted to cross a bridge to march through the city centre.

AFP: US Secretary of State John Kerry will help...