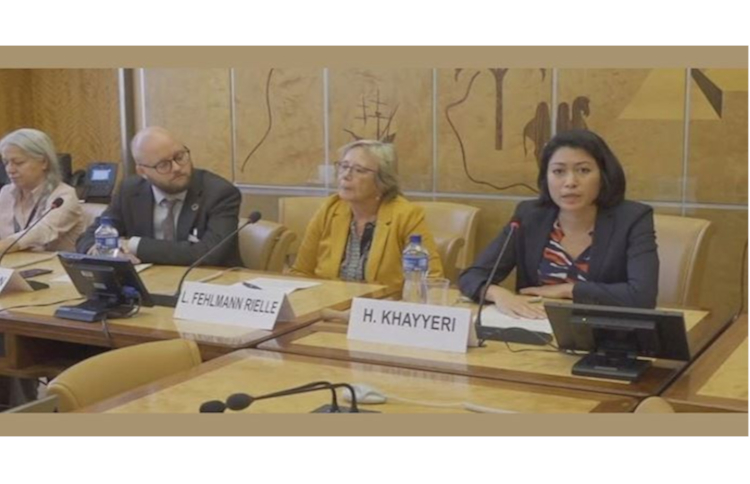 At the 42nd session of the United Nations Human Rights Council in Geneva, a conference by Italy’s Nonviolent Radical Party Transnational Transparty was held on the human rights situation in Iran at the UN’s European headquarters in Geneva, where speakers examined the widespread and systematic violations of human rights in Iran.

There were calls for an independent investigation by the United Nations about the 1988 massacre of political prisoners, led by the founder of the Islamic Republic of Iran Ruhollah Khomeini.

The keynote speakers at the conference were:

Laura Harth pointed to the continuing violations of human rights in Iran and said that the goal of this meeting is to draw attention to this issue.

The European Parliament has condemned the violation of human rights by the government of Iran. The voice of Europe was expressed on human rights. Human rights must be a priority between EU institutions and the world. The European Union must play a key role in promoting freedom, the rule of law and the protection of freedoms.

He added: “When we look at the geopolitical situation of the Persian Gulf, there is no doubt that we need to focus much more on human rights.” Human rights and fundamental freedoms must be at the center of these discussions.

He continued that the conspiracies of Iran’s government against the National Council of Resistance and the People’s Mojahedin Organization of Iran (Mujahedeen-e Khalq or MEK) had a long history and continued during Hassan Rouhani’s presence. Iran’s government has a long history of dealing with 450 terrorist attacks against political opponents so the perpetrators of these acts must be condemned.

Tahar Boumedra, head of the London-based NGO Justice for the Victims of the 1988 Massacre in Iran (JVMI):

The UN has set up a framework for investigating crimes committed. Iran’s civil society is also widely informed about the 1988 massacre. The late UN Special Rapporteur, Ms. Asma Jahangir, has made a report in this regard, and the current Special Rapporteur must now include this in his report.

I spent an hour at the Ashraf 3 Museum (the base of the MEK in Albania), which has well documented the People’s Mojahedin (MEK) cases and the crimes that the Iran government has carried out against them.

Masoumeh Joshghani outlined some of her observations in Iran’s prisons, saying that I want to reflect the voice of all my friends, especially those who were executed in the ’88 massacre. They were a generation of the bravest, and so I urge the United Nations to bring the perpetrators of this crime, now senior officials in the Iranian government, to the international courts for justice.

Another victim of the Iranian authorities Sima Mirzaie described her observations: “My family members were executed by the ‘clerical regime’. Among them, five were executed during the summer 1988 massacre. This was despite the fact that they were sentenced to prison and were serving their prison terms. The perpetrators of this crime must be tried in international courts.”

UPI: Talks began Monday at U.N. headquarters with some...

Peres says Israel will not act alone on Iran-report

Reuters: Israel will not consider unilateral action to stop...