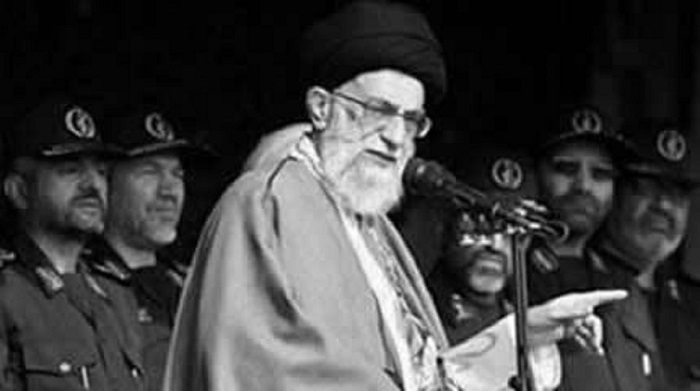 Remarks by Iran’s Supreme Leader Ali Khamenei during a meeting with Revolutionary Guards commanders on 2 October include some important points. His speech offered an update about the current situation of Iran’s government and the state of suffocation which the Iranian government faces.

Khamenei acknowledged that the presence of Iran’s president in New York was a show of failure, a demonstration in which Hassan Rouhani failed to relieve sanctions that are choking the Iranian government. So, they have no other choice but to reduce their commitments to the 2015 nuclear agreement, which, observers point out, is tantamount to ‘suicide’.

Defections in the Revolutionary Guards

For the first time, Khamenei confessed that “there were also defections in the IRGC“. This is not a strange thing, of course. A series of defections at the head of the Revolutionary Guards has shown itself with the tendency for Guards commanders to move over to ‘cultural’ work, with the consequences being that the rank and file of the IRGC lose their motivation to fight. Not only did Khamenei refer to this point plainly, but he also confirmed that: “There were also defections in the IRGC, but my firm judgment is that the IRGC has overcome the defections, and the upward movement has continued towards progress and excellence”.

Khamenei, imitating Iran’s first Supreme Leader Khomeini, who claimed he wished to be a Revolutionary Guard, wished he were a guard too, called the corps his “children” and urging them to be brave and to not lose their morale. He referred to this declining of spirits with the term “getting older”.

Khamenei made it clear that what he meant by “not getting old” is saving the spirit of the Revolutionary Guards.

Fear and the declining of spirit

Khamenei also said in a statement:

One of the distinguishing characteristics of the IRGC since the beginning has been standing up to and shielding against the big events that must be controlled.

According to analysts affiliated to the Iranian opposition, the “big event” that he fears is the explosive situation of society and the successive developments of the Iranian opposition and the strong position of the opposition People’s Mojahedin (MEK) in the country. The great event is the revolution that is on its way, with its sparkles now clearly visible. Khamenei wants the IRGC not to retreat and to save its morale in front of this big event.

Export of terror, the most obligatory subject

One of the topics addressed in this speech was Khamenei’s emphasis on the need to continue exporting the crisis which his government is faced with outside Iran’s borders. In what some analysts see as a sign that Iran’s policy of ‘exporting terrorism’ would continue, Khamenei described Iran’s role in the region as the strategic depth of his ‘regime’. He made it clear that the continuation of his regime’s life would depend on “not satisfying” Iran’s “frame”. Khamenei said the need to export crises is “most urgent”. He added, “Some people don’t understand this”.

But the main phrase in his speech which he repeated continuously was the fear of being overthrown. He said: “Do not be afraid of the enemy, but be very careful and have a real and accurate assessment of the enemy”.

As a result, in this meeting, instead of showing the strangeness of his regime, he displayed the fear that has covered his ‘regime’.

In Khamenei’s lexicon, this simply means one should fear the enemy. His recommendation, above all, is an expression of Khamenei’s own fear.

Diplomats to meet in Berlin on Iranian nuclear crisis

AFP: High-ranking officials from the five permanent members of...

By Jubin Katiraie The month of September has been...