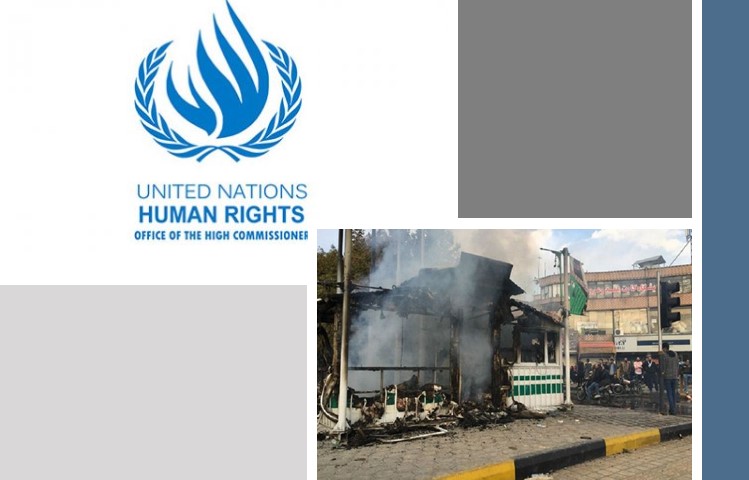 The United Nations High Commissioner for Human Rights is “deeply concerned” over the Iranian authorities’ violent crackdown on ongoing peaceful protests that began in the country on Friday.

Rupert Colville, Spokesperson for the UNHCHR, wrote in a statement on Tuesday that they were “especially alarmed” that the regime is using live ammunition to fire on demonstrators; a move that has led to a significant number of deaths across the country.

According to the reports published by the People’s Mojahedin Organization of Iran (PMOI or MEK) and the National Council of Resistance of Iran (NCRI) over 200 people have been killed by the Iranian security forces. Even Supreme Leader Ali Khamenei and the Iranian media report that dozens have been killed, many more injured, and 1,000 arrested in at least eight provinces.

The reason that it’s not possible to give an exact figure is partly due to the internet shutdown that has been in place since Saturday and is making it difficult to get any information out of the country and partially down to the cloak of secrecy that the Iranian regime wraps around any unfavorable press.

Colville wrote: “We urge the Iranian authorities and security forces to avoid the use of force to disperse peaceful assemblies and in cases in which an assembly is violent to restrict the use of force to the greatest extent possible, especially actions that are likely to cause serious injury or loss of life. This includes issuing clear instructions to the security forces to abide by international norms and standards on the use of force, including ensuring that firearms are used only in cases of an imminent threat to life or of serious injury and only when less extreme measures are insufficient to address such a threat.”

He reiterated that Iran is a party to the International Covenant on Civil and Political Rights and so, should respect the right to freedom of expression, and the right to peaceful assembly and association, as laid down in the binding international treaty. He then urged the Iranian government to immediately restore Iranians’ access to the internet, and other forms of communication, to allow for freedom of expression and access to information.

Colville further said that the authorities should engage in “meaningful dialogue” about the socio-economic challenges the population is facing, and work towards a “sustainable resolution” to these issues because responding with violence violates international norms and standards, as well as “seriously aggravating the situation to everyone’s disadvantage”, including the Iranian government.

He said: “Protests of this nature and on this scale are an indication of deep-rooted and often well-founded grievances, that cannot simply be brushed aside.”