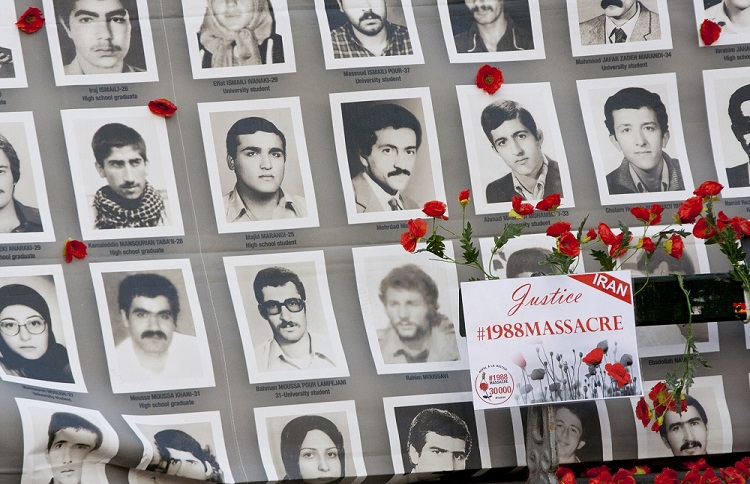 The majority of those killed were supporters of the People’s Mujahedin Organization of Iran (PMOI/MEK), although there were also some supporters of other factions, like the Fedaian.

The killings have been described as a political purge without precedent in modern Iranian history, both in terms of scope and coverup.

Morgan Ortagus, the spokesperson of the US Department of State, in a tweet pointing to the regime’s crime said:

“July 19th marks the anniversary of the start of Iran’s so-called death commissions on the orders of Ayatollah Khamenei these commissions reportedly forcibly disappeared and extrajudicially executed thousands of political dissident prisoners. The current head of the Iranian judiciary and current minister of justice have both been identified as former members of these “Death Commissions.”

This crime and other crimes and international terrorist acts by the Iranian government lead observers to conclude that action must be taken to prevent Tehran from getting more arms. So, extending the arms embargo on this regime is a must, and revoking the arms embargo is a big mistake.

This will just help the regime to raise its terror not only over its borders but mostly against Iran’s people, as we witnessed it by the November 2019 protests.

US Secretary Mike Pompeo in a press conference with the British Foreign Secretary Dominic Raab, referring to the arms embargo said:

“I discussed with both the prime minister and with the foreign secretary the importance of extending the UN arms embargo on the Islamic Republic of Iran.  We welcome the recent statement from the United Kingdom, France, and Germany recognizing that allowing the embargo to expire would have major implications for regional and security stability.”

In an interview with Al-Arabiya about the revocation of the regime’s arms embargo, US Ambassador to the United Nations Kelly Craft said: “There is so much danger, not just the Iranian people, but to the Middle East, to the entire world, to the American military that is placed all around that region.”

About the regime’s missile program, she added: “We don’t believe that they for one second want to have a peaceful purpose. They have given us absolutely no example that they had any path towards peace with their own people.”

During a Security Council Briefing on the Situation in the Middle East, she said: “What’s worse is the prospect that the regime in Tehran is poised to unleash even more misery and bloodshed, not just in Gaza, but in Lebanon, Syria, Iraq, and Yemen, should this Council allow the lifting of the arms embargo on Iran. Arguably, this session and the meetings on the Middle East in the months to come should be focused on this great threat to peace and security.”

Separately, Senator Ted Cruz in an event organized by the Foundation for the Defense of Democracies (FDD) said:

“Right now, the United States is at a critical juncture in our relationship with Iran. 5 years ago, President Obama entered the United States into a nuclear agreement with Iran that gave the Iranian regime the resources to reconnoiter havoc across the region. As you know far too well the catastrophic Obama Iran nuclear deal reconnected Iran to the global financial system while also flooding the ayatollahs with hundreds of billions of dollars in sanctions relief. Gifting them everything they needed to launder vast sums of money across the world for terrorism and proliferation.

“Now it’s time for the United States to finally and irreversibly end what remains of the disastrous deal and the benefits that Iran gets from it. By invoking the sanctions snapback described in the deals United Nations resolution. Unless we do so the U. N.’s arms embargo, the ballistic missile bans will inevitably expire allowing Russia and China to start selling billions of dollars of weapons to Iran. Toward that end, I am leading the push right now to get the administration to go to the U. N. and to invoke the snapback in U. N. security council resolution 2231.

“We don’t need anyone else’s permission to use this mechanism we can go there tomorrow and begin the process which will finally shred the disastrous Obama Iran nuclear deal. Once and for all. Of course, the challenges posed by Iran go far beyond the nuclear issue. The Iran regime’s malign activities are well known.

“Missile proliferation seeking the destruction of America and our allies including Israel creating terror states within states in Iraq Yemen and Lebanon. Floating the Assad regime in Syria funding and directing terrorism across the globe. And of course, inside Iran over and over again unthinkable human rights atrocities. Part of the response to these activities involved tearing up the nuclear deal the right thing to do because the nuclear deal forced us to give up our most powerful sanctions against these behaviors.

“We must do more. When we are talking about the future of Iran it is my belief that we need to collapse the regime. You know this used to be a straightforward and broadly accepted idea. The Iranian regime unremittingly seeks our destruction death to America the Ayatollah chants. And we will not be safe until it is gone.”

AFP: Iran is producing the uranium feedstuff that could...