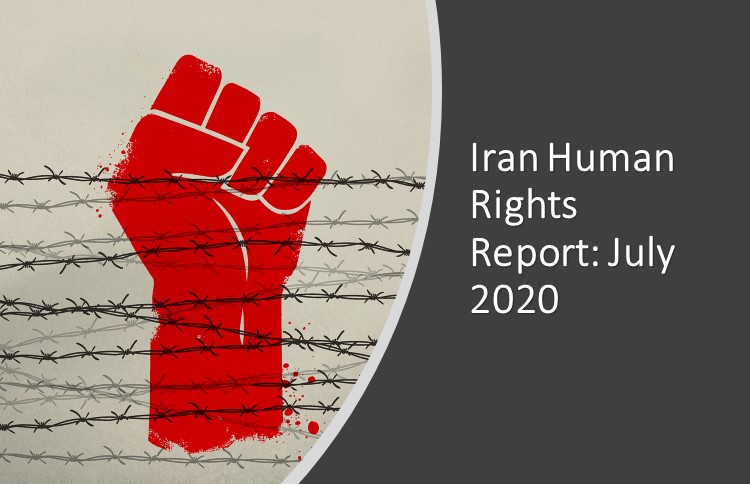 Following is the excerpt from the monthly summary of the Iran Human Rights Monitor’s report. As always, more information can be found here.

July 2020 saw the regime violate international norms and laws with its use of the death penalty and torture, as well as suppressing the people as a whole by clamping down on freedom of expression and specifically targeting ethnic and religious minorities.

The regime killed 31 people in July, with at least seven of the prisoners convicted on non-violent crimes like drug-trafficking and political activism, with many of them not able to access a lawyer. The rest of the prisoners were convicted of murder, but it’s important to remember that the regime relies on unfair trials and false confessions extracted under torture to get their convictions.

On July 15, Amnesty International said:  “There has been an alarming escalation in the use of the death penalty against protesters, dissidents, and members of minority groups in Iran.”

Meanwhile, a total of eight protesters had their death sentences upheld by the Supreme Court, including three men – Amir Hossein Moradi, Mohammad Rajabi, and Saied Tamjidi – whose initial sentence caused outrage on social media and forced the temporary delay of their executions.

The regime sought to deny the Iranian people their basic rights to freedom of expression, association, and assembly, by cracking down on protest.

In Behbahan, a peaceful protest broke out on July 16, but security forces used tear gas to disperse protesters and arrested at least 50, while three Iranians were sentenced hefty prison terms for setting fire to a poster of dead-Iranian regime terrorist Qasem Soleimani

Kurdish activist Ahmadreza Haeri was flogged 74 times and began a six-month prison sentence for “spreading propaganda against the state” and “disrupting public order”.

The regime increased pressure on political dissidents in several ways, including opening up a new case against prisoner Majid Assadi to avoid releasing him. Meanwhile, human rights lawyer Narges Mohammadi is being denied medical care after showing symptoms of the coronavirus.

The regime is also systematically violating freedom of religion; particularly when it comes to the Baha’is.

12  Baha’is were sentenced to a total of 33 years in prison because of their religion, while others face discrimination in employment and education.

Kiarash Moieni, 19, was told that he could not work at the Shiraz fire department because he was a member of the Baha’I faith, even though he’d finished his training and worked without pay as a volunteer fire-fighter already.

While 15-year-old Adib Vali, who had received several medals for his achievements, was told by the principal at Salam School, where he had been studying for three years already and was at the top of his class, that he was not allowed to return for the tenth grade.

A source said that this came after he wrote he was Baha’i on a school form.

The Systematic Trafficking of Iranian Girls

According to the National Council of Resistance of Iran...