Sale of Inmates, a New Form of Trade by Iran’s Government

Mohammad Mehdi Haj Mohammadi, chairman of the Iranian state Prisons Organization, in a meeting with the Governor of East Azarbaijan, said something that was later harshly criticized in cyberspace. Referring to the shortage of prisons and problems faced by the construction of a new prison, he addressed the private sector: “The prisoners in Iran are cheap forces, which if used by the private sector, both would gain something.”

The meaning of this approach and this suggestion is nothing but the sale of prisoners at a low price to the looters of the private sector which are the Revolutionary Guards (IRGC) officers. This private sector is nothing else than the IRGC or the foundations under the command of Iran’s supreme leader Ali Khamenei.

This official said in another interview that “prisons should reach self-sufficiency and not be reliant on the budget of the government.” 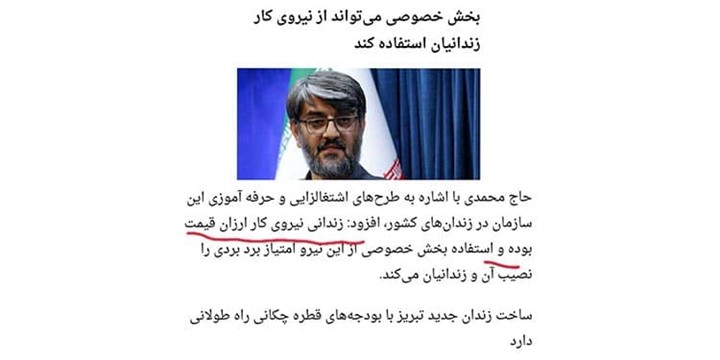 According to official statistics, more than 200,000 official prisoners are held in Khamenei’s prisons. Although the real number is thought to be far higher. These statistics do not include detainees with an unclear situation. According to the head of the Prisons Organization, more than 50 percent of prisoners have been used in prisons. That is, a population of 100,000 people are working, and the prison economy spins with the suffering of these prisoners.

The benefit from the slave work of the prisoners is entirely in the pocket of the state Prisons Organization. As an example, we read a report on Isfahan Prison:

“The prisoners working in Isfahan’s prisons are treated like slaves. In different factories with high profitability, they are exploited. The profit derived from the prisoners work in the is going to pockets of the prison organization and their agents in the relevant factories.”

Prisoners in the Ghale Shur camp and other places are subject to mistreatment and threat of return to prison. They treat the prisoners based on slavery laws. The prisoners are taken for forced labor. They are forced to tolerate insults and humiliation daily.

These prisoners receive 17,000 Tomans per day for at least 8 hours of work, and even that petty sum is not paid for months.

The owners of the work, which are usually stone factories in Isfahan, pay 80,000 Tomans for the prisoners’ daily work. But from this amount, for each prisoner, 63,000 Tomans is deducted by the Prisons Organization and a small amount of 17,000 Tomans is given to the prisoners.

Another example from Karaj’s central prison: At 5 km of Karaj’s Atashagah road to the Chalous road, which is under construction, the government uses 300 to 350 prisoners to build this highway. Without any payment. All money is poured into prison account. These prisoners are given furlough for just 2-3 nights.

Astonishingly, the number of judicial cases in Iran has reached 14 million annually. That is, one sixth of all Iranians are dealing with jail and court and the judiciary yearly. Is this not the result of anything other than poverty and unemployment?

When government officials use the public tribune and say something that many of the audiences of the virtual network describe as slavery and forced labor, it is clear that what is behind this thought is much worse.

Bush signals no further reduction of troops in Iraq

Reuters: Iran on Monday executed a brother of the...