Iran Focus: London, May 11 – The Islamic Revolutionary Guards Corps constitutes the backbone of clerical rule in Iran and is controlled directly by supreme leader Ali Khamenei. Most trade and oil contracts signed by necessarily involve the IRGC. The first part of our overview of the IRGC focuses on its economic enterprises. 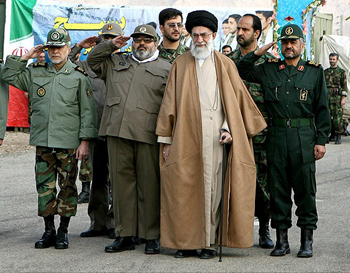 London, May 11 – The Islamic Revolutionary Guards Corps (IRGC), which under Iran’s constitution is tasked with “guarding the Revolution and its achievements,” constitutes the backbone of clerical rule in Iran and is controlled directly by supreme leader Ali Khamenei. The IRGC’s increasing sway in the regime signals the concentration of power in the hands of Khamenei, the purging of all other factions, and closing of the regime’s ranks.

The IRGC plays the key role in security, intelligence and military matters. Under Khamenei, it has grabbed a large portion of ’s economy, especially in the oil and gas industries, and its former commanders occupy numerous government posts. As a result, most trade and oil contracts signed by necessarily involve the IRGC.

The first part of our overview of the IRGC focuses on its economic enterprises.

Mahmoud Ahmadinejad’s rise to power as Iran’s president in 2005 marked the beginning of a trend that has seen top government posts filled by current and former IRGC commanders. Ahmadinejad himself is a former commander.

Ten out of the 21 ministers in his current cabinet, formed in September 2009, are IRGC commanders, as are one-third of 30 provincial governors.

80 seats in the 290-seat Majlis (Parliament) are held by former IRGC commanders. The Majlis Speaker, Ali Larijani, was an IRGC Brigadier General.

The head of the state Radio and TV, Ezzatollah Zarghami, was an IRGC Brig. General. The Secretary of the Supreme National Security Council and ’s chief nuclear negotiator, Saeed Jalili, was an IRGC commander. The mayor of Tehran, Mohammad-Baqer Qalibaf, was a Commander of the IRGC Air Force.

Khamenei’s decision to transfer control of a large portion of ’s commerce, industry, oil and gas and services sectors to the IRGC follows three objectives:

1) To create front companies in a bid to conceal the nuclear and missiles program and facilitation of purchases and activities in this regard;

2) To fund the nuclear project and fundamentalist activities in the region;

3) To exclude other factions and to accumulate power in the hands of Khamenei himself.

In recent years, Ahmadinejad’s government has given control over state enterprises to the IRGC at a comparatively negligible cost through the granting of special privileges.

The IRGC’s economic ventures are carried out by a large conglomerate known as “Khatam ol-Anbia Base,” which has registered companies in and abroad.

In addition to running the nuclear facilities and other missile and military industries, the various sectors of the Iranian economy that the IRGC is rapidly proceeding to dominate are as follows:

In 2009, the IRGC purchased a 51 percent stake in the Telecommunications Company, which handles all telephone land lines, cell phones and data communications, and employs over 47,000 people.

The “Iran Electronics Industry” is one of the IRGC’s largest companies and has a chain of affiliates:

The IRGC also handles a significant portion of infrastructure projects, including the building of dams, roads, electrical power transmission lines, and tunnels. In addition to generating profits, a number of these projects also have a military dimension. This is specifically true for the building of tunnels, which is carried out with the cooperation of European companies, in order to conceal nuclear and missile projects.

Major IRGC companies active in this field include:

Smuggling Activities and the Black Market

Among the most important revenue generating activities for the IRGC are illegal imports and exports and involvement in the black market. Revenues from IRGC black market activities exceeded 12 billion dollars last year.

In recent years, the IRGC has controlled most contracts in ’s oil and gas sector. In 2006, in the span of a month, the IRGC signed three large oil and gas contracts with the government worth 7 billion dollars. Some of the IRGC’s activities in this field include:

1. Rights to Exploration, Extraction, Technical and Construction Projects in the Oil and Gas Sector

2. Acquisition of Numerous Companies in the Oil, Gas and Petrochemicals Sectors

3. Creating a Monopoly over Oil Reservoirs

Today, the IRGC is the most important builder of oil reservoirs, creating a monopoly over such projects, which include:

In April 2006, the opposition National Council of Resistance went public with information that up until that year Iran had smuggled more than 20 billion dollars worth of oil from Iraq.

AFP: Foreign Secretary David Miliband was in China on...