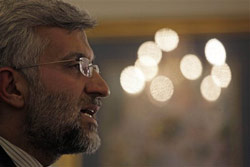 “Ms Ashton had requested a meeting several times. Iran agreed to this but the date has not been set yet. About the venue, as Turkey suggested that it be held there, we do not see a problem with that,” Ramin Mehmanparast said.

He told reporters that Jalili, who is secretary of Iran’s Supreme National Security Council, would represent Tehran in the talks.

Ashton said in Brussels on Monday that she was prepared to hold talk with Iranian leaders, but only about its controversial nuclear programme.

“We should wait and see what issues she wants to discuss,” Mehmanparast said, insisting that Iran’s nuclear programme was a matter for discussion with the International Atomic Energy Agency.

“If she wants to bring up international issues, we will examine them and the nuclear fuel swap has its own formula,” the spokesman said.

Ashton asked Ankara to contact Iranian authorities and try to organise talks on behalf of the six world powers involved in efforts to persuade Tehran to suspend uranium enrichment, a spokesman in Brussels said.

The West has long accused the Islamic republic of seeking to develop nuclear weapons under the guise of its civilian nuclear energy programme, charges Tehran denies.

Iran has also dragged its feet on a UN-brokered deal presented in October that would see most of its low enriched uranium stockpile shipped out of the country to be further enriched into nuclear fuel for a Tehran research reactor.

The deal stalled after Iran insisted the two materials be exchanged simultaneously within its borders.

Mehmanparast said on Tuesday that Iran had been discussing “a new formula” for the nuclear fuel swap with Turkey and Brazil — both non-permanent members of the UN Security Council.

The two countries are opposed to fresh sanctions against Iran and have stepped up efforts for a diplomatic solution to the nuclear standoff.

Turkish Prime Minister Recep Tayyip “Erdogan will be in Iran at the same time as the Brazilian President” Luiz Inacio Lula da Silva, who is due to make an official visit to Tehran from May 16 to 17, the spokesman said.

“Talks will be held” with both leaders on the nuclear fuel deal, he said.

Reuters: Iran has imprisoned an Iranian American affiliated with...