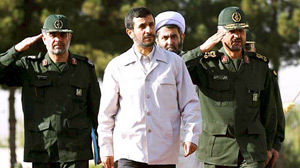 London, May 12 – The Islamic Revolutionary Guards Corps’ huge annual revenue, stemming from its vast financial activities, allows it to fund Iran’s nuclear projects and support Tehran’s allies in the region.

Spending and allocation of IRGC revenues

1.    The IRGC’s economic activities fund Iran’s nuclear development and missiles programs. Its financial activities are not included in the government’s official annual budget.  A secret budget is used to fund these programs instead. IRGC front companies are tasked with importing most sensitive goods required for the nuclear and missile programs. In addition, the IRGC carries out the construction of required infrastructure for these projects such as tunnels and power plants.

2.    Outside Iran, funds for fundamentalist groups are largely provided from revenue acquired through the IRGC’s economic activities.

A.    In order to cover up its activities in Iraq, the IRGC’s extra-territorial Qods Force has set up numerous institutions that appear to perform merely economic activities or charitable work in that country. There are more than 630 IRGC front companies in Iraq, bringing the total volume of declared annual trade with Iraq to four billion dollars. In 2005, the opposition National Council of Resistance of Iran (NCRI) went public with a list of names and particulars of 32,000 individuals in Iraq who it said were on the payroll of the Qods Force. Such payments are part of the vast budget the IRGC spends in Iraq in order to dominate the country once US forces depart.

B.    The IRGC provides extensive funds to the Lebanese Hezbollah. It has given Hezbollah Fajr 1, Fajr 2, Fajr 3 and ground-to-air missiles. Following the 33-day Lebanon war in 2006, the IRGC started to invest heavily in that country. The ostensible objective of the investments was to rebuild devastated regions, but another goal was to establish Hezbollah’s required communications channels, including a microwave system complete with tunnels. .

C.    In Afghanistan, the IRGC oversees numerous construction projects which serve as a cover for planning terrorist operations or supplying of logistical support to terrorists. These projects include building of roads and bridges as well as agricultural development. More than 100 companies have been set up by the IRGC for this purpose. They include “Ayadgaran” in Herat and the “Iran-Afghanistan Commerce.” The Ahmadinejad government has allocated 50 million dollars annually to these companies to fund their projects.

D.    In Palestine, the IRGC actively supplies money and weapons to its affiliated groups. It trains military elements in Hamas and Islamic Jihad. In Gaza, the IRGC has also set up bases acting as conduits for the transfer of money, supplies, and other resources through charity institutions for such purposes.

The IRGC’s Cooperatives Foundation was established in 1988.

In the course of the privatisation initiative of 1989, the Foundation gained control of many government institutions, including the Bahman Car Manufacturing Group.

Members of the Board of Directors include:

The role of the IRGC’s Cooperatives Foundation in economic affairs

The activities of the Cooperatives Foundation span from importing commodities, distributing cigarettes, and involvement in the oil business, to building shopping centres and refineries.

The Foundation’s main economic niche is investments. It has invested in many economic sectors, including the Bahman Group.

The Bahman Group was founded in early 1953 under the name of “Khalij Kou” public company with an initial investment of 600,000 rials. It was intended to be involved in operations pertaining to the transportation business, including shipping, and to obtain commission and fees for existing representative offices.

After a decision by an extraordinary shareholders meeting, the company name was changed on June 7, 1971, to “Mazda Car Manufacturing” Limited. On June 27, 1984, it again changed its name to “Iran Vanet.” On March 15, 1992, it became a publicly traded company, earning a spot on the Tehran Stock Exchange on March 9, 1994. On July 19, 1999, an emergency session of the general assembly of the shareholders, voted to revise the company’s charter and changed its name to the “Bahman Group.”

2) Shareholders of the Bahman Group:

3) Since the IRGC Cooperatives Foundation has a majority stake in Bahman Group, the group’s Managing Director and Chairman of the Board of Directors are selected by the Foundation. Currently, the Managing Director of the Bahman Group is Mohammad Reza Soroush while the Chairman of the Board of Directors is Homayoun Sheikh al-Eslam, both of whom were appointed by the Foundation.

The Bahman Group is an active company in the country’s stock market. It is in charge of trading stocks and other investments at the IRGC Cooperatives Foundation. It is also ranked as one of the largest companies involved in the Tehran Stock Exchange.

Some of the companies whose stocks have been traded by the Bahman Group at the Tehran Stock Exchange as well as the group’s ownership in each are as follows:

A number of companies which have permits to engage in international commerce and are used by the IRGC as front companies to circumvent sanctions include:

The IRGC Cooperatives Foundation’s affiliates that have ties to foreign contacts and are used by the IRGC as front companies include:

A list of names of the companies affiliated with the IRGC Cooperatives Foundation is as follows. The Foundation owns all or some of the shares in these companies.