AFP: Gulf leaders meeting in Riyadh on Tuesday declined to comment on an alleged Iranian spy cell broken up in Kuwait but said the six-member group will face security threats as one. 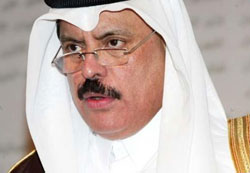 RIYADH (AFP) — Gulf leaders meeting in Riyadh on Tuesday declined to comment on an alleged Iranian spy cell broken up in Kuwait but said the six-member group will face security threats as one.

Gulf Cooperation Council secretary general Abdulrahman al-Attiyah said after a one-day summit of six Gulf leaders that they were leaving the issue of the busted spy cell to Kuwait to handle “for the moment.

He declined to detail the group’s views on arrests of suspected spies in Kuwait last month.

Kuwait confirmed that several suspects were being questioned in connection with a busted cell, but it fell short of confirming press reports that they were spying for Iran’s Revolutionary Guards.

At least seven people, including members of Kuwait’s army and police, were under arrest, according to the Kuwaiti daily Al-Qabas, which added that the security forces were hunting for other suspects.

In the wake of those arrests, Bahraini authorities said they had arrested a Bahrain national suspected of links to the Kuwait spy operation.

Asked if the GCC is concerned about a region-wide spy network from Iran, Attiyah said the group has a committee “at the level of interior ministers” following the issue.

“But our Kuwaiti friends want to handle it themselves for the moment,” he said.

US keeps frustration at Russia in check as Iran sanctions loom

AFP: The United States revealed its frustration Friday at...

Big powers to meet in Berlin on Iran

Reuters: Foreign ministers from the five permanent members of...