Iran Focus: Tehran, Jun. 20 – An Iranian cleric who is little known in the West is heading an intelligence operation that was formed only last year to counter political unrest, and which has rapidly become the Tehran regime’s main security force. 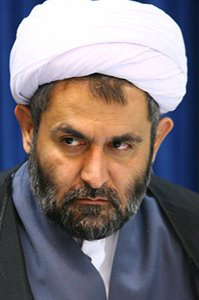 Tehran, Jun. 20 – An Iranian cleric who is little known in the West is heading an intelligence operation that was formed only last year to counter political unrest, and which has rapidly become the Tehran regime’s main security force.

Hojjatoleslam Hossein Taeb heads the Intelligence Organisation of the Islamic Revolutionary Guards Corps (IRGC) which was created in mid-2009 on the orders of Supreme Leader Ayatollah Ali Khamenei to centralise the security forces clamping down on unrest that followed the disputed presidential election.

Iran Focus has learnt that the organisation has also been tasked with accelerating Iran’s nuclear projects, which are run by the IRGC.

In 2008, he became the first cleric to formally head the paramilitary Bassij militia, having been acting commander for nine months.

When anti-government protests swept the country last June, Taeb ordered the Bassij, an offshoot of the IRGC, to forcefully clamp down on unrest. The opposition says the violence left up to several hundred killed and thousands injured or arrested.

Taeb was a student of Khamenei in the early days of the 1979 revolution. He had studied theology in Tehran and in the holy cities of Qom and Mashhad. In 1982 he joined the Revolutionary Guards and played a key role in cracking down on opponents of the theocratic state.

Near the end of the Iran-Iraq war, Taeb was transferred to the IRGC’s Habib-ibn-Mazaher Brigade, where he befriended Mojtaba Khamenei, son of the present Supreme Leader.

During the administration of President Ali Akbar Hashemi Rafsanjani (1989-1997), Taeb briefly served as head of espionage in the Ministry of Intelligence and Security (MOIS) before Rafsanjani personally ordered his dismissal after a dispute over faulty intelligence.

After Taeb’s expulsion from the MOIS, Mojtaba pulled a few strings that saw the radical cleric become deputy coordinator for the Supreme Leader’s Office. He also headed the cultural faculty of the Imam Hossein University, where most IRGC staff and commanding officer corps receive training.

Taeb was granted powers of interrogation during the Khatami Administration, and he led a purge of numerous officials considered as not loyal enough.

As nationwide protests continued last August, Taeb, as head of the Bassij, warned of a “soft threat” by enemies of the Islamic Republic to sow discord. “Enemies made their utmost efforts to spark and spread pessimism among the people and break integration of the Iranian nation”, he said.

The opposition National Council of Resistance of Iran asserts that the IRGC’s intelligence arm which Taeb now heads has been significantly upgraded to include the Sarollah Headquarters, the main centre for commanding security operations in Tehran, and plainclothes agents used to contain street protests.

The office is headquartered in Qasr-e Firouzeh (Firouzeh Palace) district, where the IRGC has its command centre in a secluded township called Kamali.

The development of the IRGC Intelligence Office, over which the government has no control, was accompanied by a secret purge in the Intelligence Ministry, with hundreds of intelligence agents and directors losing their jobs.

Reuters: The European Union has told Iran in a...

AFP: A French court on Tuesday freed an Iranian...