Iran Focus: Tehran, Feb. 26 – Iran Focus has obtained an internal report by a commander of the Islamic Revolutionary Guards Corps about the 20 February anti-government protests in Tehran. (Text translated by Iran Focus) 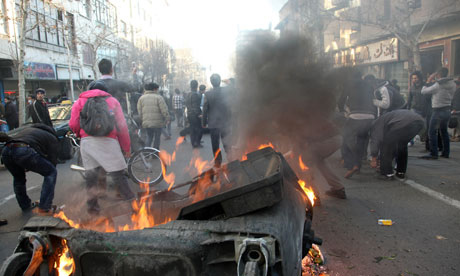 On 20 February, around 4:00 pm, I was around Vali Asr junction. The crowd pretended as though it is regular people. It was, however, obvious that they had come out being specifically organised, walking toward Enqelab Square. People from all walks of life, young and old, had joined each other.

The crowd was quiet around Vali Asr Square, but from Vesal Street to Vali Asr junction there was mayhem. A huge crowd was moving toward Enqelab Square.

I had done the same thing on 14 February. I went around many neighbourhoods in the vicinity of Enqelab Square and regrettably saw some terrible incidents. The protesters were beating up the Bassijis. They even dragged three Bassijis from their bikes and beat them up severely.

The crowd on 20 February was quite well organised. They were not ordinary people and seemed quite angry. I could see the rage in their eyes. I spoke to some of them, was scared and stepped away. The young protesters beat up a couple of Bassijis who were wearing camouflage uniforms.

The Bassijis are quite naïve. I saw one of them beaten up badly after he began chanting slogans in support of [Supreme Leader] Ali Khamenei. He was lucky to escape; otherwise he would have been killed. The crowd was so angry that I was scared to intervene.

While walking, I was angry with myself and was praying to God Almighty to help the Leader overcome this critical situation. The people were quite enraged. I hope this thing does not repeat itself.

A commander of the IRGC’s Seyyed Ol-Shohada called me and asked about the situation. He was extremely concerned.

Bloomberg: Azerbaijan will send its foreign minister to Israel...