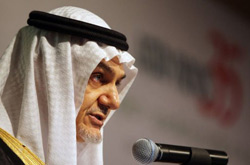 “Adding to the brutal mayhem taking place there, we are watching a deliberate effort on the part of the incumbent prime minister, Mr al-Maliki, to hijack the results of the election and deny the Iraqi people their legitimately elected government,” he said.

“The consequences of that are more bloodshed and potential civil war,” Prince Turki, a former Saudi ambassador to the United States and Britain, told an audience of diplomats, journalists and businessmen attending a conference hosted by Arab News.

Unpopular with Riyadh, Maliki and his State of Law Alliance won 89 parliamentary seats, two less than the Iraqiya bloc of former prime minister Iyad Allawi, who is well-regarded by the Saudi government.

State of Law and the Iraqi National Alliance (INA), a coalition led by Shiite religious groups, which finished third with 70 seats, have sought to form a coalition.

But their alliance still falls four seats short of a parliamentary majority, and recounts, nearly completed, so far have not changed the results.

Prince Turki, who has no official position but is believed to often reflect high-level Saudi thinking, also called for a UN Security Council guarantee of Iraq’s integrity, warning that both internal and external groups seek to carve up the country.

“With American forces due to leave Iraq next year, this is the only option that will meet the challenge posed by several Iraqi political factions whose main ambition is to partition Iraq,” he said.

“Equally sinister are the designs of some of Iraq’s neighbors to take advantage of impending Iraqi internal conflict to advance their acquisition of Iraqi territories,” he said.

Turki pointed to what he said was Iran’s “encroachment” earlier this year on land in southern Iraq. He did not elaborate, but might have been referring to an incident in December, when Iraqi troops briefly occupied an oil well on land claimed by Iraq.

“Imagine what will happen once internal strife and fighting escalates” in the wake of the US pullout, he said.

Without a Security Council effort to protect Iraq’s current borders, he said, the consequence could be “regional conflict on a scale not seen since the Ottoman-Safavid wars of the 17th and 18th centuries.”

Iran: The Role of the MEK

By Jubin Katiraie The Mujahedin-e Khalq (MEK) has been...