BBC: Iraq’s top army officer has criticised the planned US troop withdrawal by the end of next year as premature. 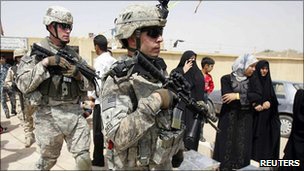 Iraq’s top army officer has criticised the planned US troop withdrawal by the end of next year as premature.

Lt Gen Babaker Zebari warned that the Iraqi military might not be ready to take control for another decade.

The White House says President Barack Obama is satisfied with the progress made in Iraq, which will allow US troops to transfer security to local forces as planned.

But Lt Gen Zebari told a defence conference in Baghdad that the Iraqi army would not be able to ensure the country’s security until 2020 and that the US should keep its troops in Iraq until then.

“At this point, the withdrawal [of US forces] is going well, because they are still here, but the problem will start after 2011,” he said.

“The politicians must find other ways to fill the void after 2011… If I were asked about the withdrawal, I would say to politicians: the US army must stay until the Iraqi army is fully ready in 2020.”

Violence in Iraq has fallen since the peak of sectarian warfare in 2006-2007, but the number of civilian deaths from daily bombings, shootings and other attacks rose sharply in July.

In Washington on Wednesday, White House spokesman Robert Gibbs attributed the recent rise in attacks to the Islamic fasting month of Ramadan, which has previously coincided with a spike in insurgent activity.

“We continue to anticipate… a traditional up-tick of violence around Ramadan and as those [insurgents] that are left try to gain attention,” he said.

He gave a positive assessment of the situation in Iraq, based on a briefing by Gen Ray Odierno, the US commander there, to President Obama.

“Already we have removed over 80,000 troops from Iraq since President Obama took office,” said Mr Gibbs.

“Gen Odierno also reported that the security situation has retained the significant improvements made over the last couple of years and that Iraqi security forces are fully prepared to be in the lead when we end our combat mission later this month.”

More than 100 people have died in attacks across the country so far this month. July was Iraq’s deadliest month since 2008.

Mr Gibbs said President Obama was also brought up to date on Iraq’s so far unsuccessful efforts to form a new government.

The country’s political leadership is still deadlocked after national elections in March failed to produce a clear winner.

AP: Iranian support for militias in Iraq has grown,...

AFP: The US Senate on Thursday unanimously approved harsh...