AFP: Iraq’s privately-owned banks have called for the country’s state-owned lenders to be privatised to break up a near monopoly in lending by politicians whose actions remain stuck in the Saddam-era. 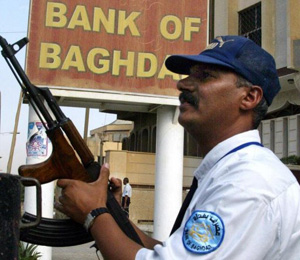 BAGHDAD (AFP) — Iraq’s privately-owned banks have called for the country’s state-owned lenders to be privatised to break up a near monopoly in lending by politicians whose actions remain stuck in the Saddam-era.

Although foreign cash has flowed in since the US-led invasion of 2003, ministers still opt to use government banks to do business and are failing to use private rivals, which is hampering economic growth, bankers argue.

The lack of a new government and poor security are also stifling efforts among international banks to plant a solid foothold in Iraq, whose economy, with the exception of oil, is showing little sign of improvement despite low inflation and a stable currency.

Fouad al-Hassani, chairman of the Iraqi Private Banking League, said the next government should privatise the seven state-backed lenders to create a level playing field among banks, as promised under the constitution.

“Unless they are privatised the government will still lean on their own banks,” he said. “That is not in line with an open market policy.

“We are looking for a new government so that we can talk to them again. The constitution is very clear on what they should do.”

Iraq currently has 36 privately-owned banks, most of them each holding capital of 50-150 million dollars, compared to 17 private banks during the rule of dictator Saddam Hussein, ousted in the invasion.

Six of today’s private banks have foreign shareholders — banned before 2003 — with global giant HSBC and the National Bank of Kuwait holding majority stakes in Iraqi lenders.

Banks from Iran, Turkey, Lebanon and Bahrain are also investing in Iraq but business remains dominated by government lenders, just as it was under Saddam.

“We are now handling about 15 percent of the country’s total liquidity, compared to less than five percent in 2003,” with the state banks controlling the rest, said Hassani, who is aiming for a 25-percent stake within two years.

“Because the government owns virtually everything, 95 percent of business is done by the government, be it in defence, health, industry or whatever,” added Hassani, who is also managing director of privately-owned Credit Bank of Iraq.

“If they let go, they will benefit” as a result of free market competition, he added.

A continuing lack of security in Iraq — 535 people were killed in July, the deadliest month since May 2008 — and no new government since an inconclusive March 7 general election are also deterring investment.

“It is difficult for a foreigner to come into a situation like this. Why should they be killed for a five-percent profit?” Hassani, 72, asked.

A survey of more than 300 senior executives by the Economist Intelligence Unit (EIU) published on Monday found that seven years after the invasion, 64 percent thought it was still too dangerous to do business in Iraq.

Dr Sinan Al-Shibibi, governor of the Iraq Central Bank, conceded that many international banks are put off by the violence.

“The prospects are good, except for security,” he said. “Some kind of cooperation with foreign banks will definitely be there I have no doubt.

“We are calling for them to come and help develop the financial system, this is the objective. I would prefer that they establish standalone branches but even if they do a partnership with Iraqi banks that would be fine.”

The Iraqi dinar was revalued after the invasion and it has been stable at 1,160-1,180 to the dollar for almost two years, helping deliver stable inflation of around three percent.

Typical interest is about six percent on dinar deposits and loan rates tend to vary between eight and 12 percent, but trust is still low among the public.

“We are still a cash society but it is developing and improving slowly,” Shibibi said, asked why Iraqis are often reluctant to bank their money.

Indrajit Roy Choudhury, an Indian banking expert working for the state-owned Trade Bank of Iraq, said Hassani was right about a historic lack of government use of private banks, but argued that the situation was steadily changing.

“Slowly it’s being done. Government ministries are now contracting out to businesses and using letters of credit, which is creating business for private banks. Previously all trade would have been done internally,” he said.

AFP: A US military commander on Saturday accused Iranian-linked...