AFP: Kuwait has expressed safety concerns over Iran’s new nuclear reactor on the opposite side of the Gulf, fearing fallout from possible leaks, the official news agency KUNA reported. 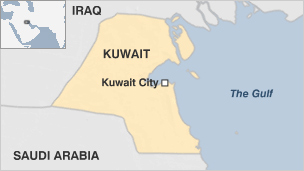 KUWAIT CITY (AFP) — Kuwait has expressed safety concerns over Iran’s new nuclear reactor on the opposite side of the Gulf, fearing fallout from possible leaks, the official news agency KUNA reported.

“Kuwait’s concern is based on fears of any leaks due to natural causes that may have future consequences,” foreign ministry undersecretary Khaled al-Jarallah said, quoted by KUNA late on Monday.

Kuwait is the nearest country to the Russian-built nuclear plant in the Iranian city of Bushehr, located like Kuwait in the northern Gulf.

Iran loaded the Bushehr facility with nuclear fuel last Saturday and the United States said there was no “proliferation risk” from the civilian plant because of Russian involvement.

A number of Kuwaiti MPs, however, have called on the government to take precautionary measures against any incident from Iran’s first nuclear plant.

But Iran’s foreign ministry spokesman Ramin Mehmanparast told reporters at his weekly press conference on Tuesday that the Bushehr plant adheres to “high standards” and had the seal of approval of the UN nuclear watchdog.

According to Kuwaiti media, a senior Iranian official is expected in the emirate within days, possibly to discuss the nuclear plant issue.

During a brief visit to Kuwait on Monday, following talks in Tehran, Qatar’s Prime Minister Sheikh Hamad bin Jassem al-Thani said in a statement carried by KUNA that the Bushehr plant was Iran’s business.

“If the plant is peaceful and for power use according to our information, then this is a legitimate right for Iran under international law and we do not want to change this framework at the present time,” he said.

Bloomberg: Iran is trying to destabilize Iraq and its...