Iraqis approach end of US combat role with worry

By BARBARA SURK and REBECCA SANTANA 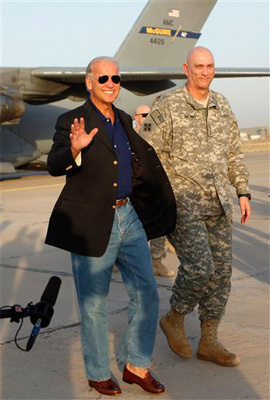 Iraqis, who for years have railed against the U.S. occupation, are generally happy to see that the American presence won’t be endless. But there is also considerable trepidation about whether Iraq can go it alone.

“It’s not the right time,” said Johaina Mohammed, a 40-year-old teacher from Baghdad. “There is no government, the security is deteriorating, and there is no trust.”

Just under 50,000 U.S. troops remain in Iraq — down from a peak of nearly 170,000 at the height of the military surge in 2007. Those troops will be focused on training and assisting the Iraqi military, and will no longer be allowed to go on combat missions unless requested and accompanied by Iraqi forces.

Underscoring the shift, Biden was making a new appeal to Iraqi leaders Tuesday, including Prime Minister Nouri al-Maliki, to end the political deadlock and seat a new government. March 7 parliamentary elections left Iraq without a clear winner, and insurgents have since exploited the uncertainty to hammer Iraqi security forces.

Iraqi forces are vastly improved and attacks have plummeted since the dark days of 2006 and 2007. But rarely a day goes by without some loss of life, and spectacular attacks such as the violence on Wednesday that killed 56 people still happen with disturbing regularity.

Biden and U.S. officials have downplayed suggestions they are abandoning Iraq at a crucial time. The vice-president Tuesday said militants’ attempts to again wreck havoc in Iraq have been unsuccessful.

“Notwithstanding what the national press says about increased violence, the truth is, things are still very much different, things are much safer,” Biden said Tuesday in comments to al-Maliki.

In an address to the nation to mark the end of combat operations, al-Maliki said Iraqi forces were capable of handling security and protecting people from attacks after U.S. combat troops pull out.

He characterized attacks that continue to plague the country as a “desperate attempt by al-Qaida and remnants of the former (Saddam Hussein) regime to prove their presence.”

“I assure you that the Iraqi security troops are capable and qualified to shoulder the responsibility,” he said in comments broadcast live on Iraqi state television.

The end of combat operations, according to al-Maliki, was a basic step in restoring Iraq’s sovereignty. The prime minister also promised a full withdrawal of American troops next year.

But many Iraqis do not share the optimism demonstrated by the vice president and the prime minister.

The fear of political divisions, aggravated by the struggle for control of Iraq’s oil potential, is ever present. Some Iraqis worry that without the American soldiers, their country will revert to a dictatorship or split along religious and ethnic fault lines.

“They should wait for the government to be formed and then withdraw,” said Mohammed Hussein Abbas, a Shiite from the town of Hillah south of Baghdad.

U.S. military officials say the reduction in troop numbers doesn’t hinge on Iraq forming a new government, but on the ability of Iraqi forces to handle security on their own.

The decision to draw down to 50,000 troops was made by President Barack Obama, and is not part of the security agreement between Iraq and the U.S. Under that agreement, all American troops are to be out of Iraq by the end of 2011.

A spokesman for President Barack Obama, Robert Gibbs, said on television Tuesday that Obama had been assured recently by the top American commander in Iraq that it would be highly unlikely that a new wave of violence would envelope the country and prompt the U.S. to send troops back to Iraq.

The president is scheduled to give a speech Tuesday evening commemorating the end of combat operations in Iraq, in what appears to be an attempt to remind Americans that he’s keeping his promise to end the Iraq war.

The dwindling U.S. military presence has deepened concerns that Iraq will be taken over by its neighbors — namely Iran — who many think is waiting to fill the power vacuum created by the departing Americans.

“The U.S. withdrawal will put Iraq into the lap of Iran,” said Ali Mussa, a 46-year-old engineer from eastern Baghdad. Iran and Iraq are both majority Shiite countries. And Iran has already capitalized on the U.S.-led overthrow of its arch enemy Saddam to secure greater leverage in Iraq, using centuries-old religious and cultural ties.

Even former Sunni insurgents in Fallujah, who supported armed resistance against two American assaults on the city in Iraq’s western province of Anbar, are dismayed at U.S. troops leaving after they joined forces and fought extremists together.

“Of course we were against the occupation, but in 2007 the Americans came up with a good plan for fighting al-Qaida, not Iraq,” said Col. Abdelsaad Abbas Mohammed, a Fallujah commander in the government-supported Sunni militia, known as the Awakening Councils. “Americans have committed many mistakes, but they did not go into houses and chop people’s heads off.”

In the three provinces that make up the autonomous Kurdish region in northern Iraq, the American military departure is also cause for concern. The Americans have often been perceived as the protectors of the minority Kurdish population, which was repressed under Saddam, but later carved out a relative oasis of stability in northern Iraq.

Othman Ahmed, 38, and a lawyer from the Kurdish city of Sulaimaniyah, said Iraqi politicians would like to return Iraq to the strong centralized government of the former regime — meaning the Kurds’ hard-won autonomy could be at jeopardy.

Many Iraqis also had higher hopes for their quality of life after the 2003 U.S.-led invasion, especially after years cut off from the rest of the world under Saddam. Now people have access to the Internet, satellite television and consumer goods such as new cars, laptop computers, and mobile phones. But they struggle with constant shortages of electricity and water, the capital is crisscrossed with concrete barriers and parents worry about their children’s education after thousands of teachers fled the country.

To many Iraqis, the U.S. drawdown and emphasis on the end of combat operations looks to many Iraqis as if Obama is playing to domestic politics instead of assessing what is truly right for Iraq,

“The Americans should think about the door they’re walking out of,” said Sheik Ali Hatem Sulaiman al-Dulaimi, an influential tribal leader from Anbar province. “This is the destiny of a nation.”

Associated Press writers Mazin Yahya and Lara Jakes in Baghdad and Yahya Barzanji in Sulaimaniyah contributed to this report.

In recent weeks, many protests have taken place across...