Washington Post – By Ryan C. Crocker: Much has been written in recent days about Iraq and anniversaries. August 1990: Iraq invades Kuwait. August 2010: The last U.S. combat brigade withdraws from Iraq. Are these the bookends of a 20-year war? Did we win? What does winning mean? 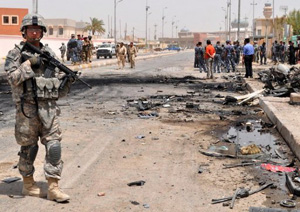 Much has been written in recent days about Iraq and anniversaries. August 1990: Iraq invades Kuwait. August 2010: The last U.S. combat brigade withdraws from Iraq. Are these the bookends of a 20-year war? Did we win? What does winning mean?

The significance of August 1990 remains considerable. It was the dramatic opening of the post-Cold War era, in which regional actors, state and non-state, could operate without the constraints imposed by the two great blocs. We thought in those early days that the challenge was an opportunity — that an international response to this aggression would pave the way for a new world order, orchestrated by a benevolent America.

That, of course, is not how it turned out. A defiant Saddam Hussein hung on in Baghdad as an effort at international containment slowly unraveled in the 1990s. U.S. forces overthrew his regime in 2003 and, depending on your political preference, the withdrawal of combat forces this month brings to a close a protracted but successful campaign, or ended a prolonged exercise in misguided futility.

Except it didn’t. The exit of combat troops does not end the post-1990, non-polar disorder that Hussein’s invasion launched. He illustrated an international paradigm shift; he did not create it. Nor does it mean that Iraq is now “over.” All of the momentous events of the past 7 1/2 years notwithstanding, Iraq is still at the beginning of its new story, with a future that will be defined by events that have not yet taken place. We have a vital strategic interest in the shape of that future: a stable, pluralistic Iraq in close association with the United States and the West can fundamentally reshape the map of the Middle East. An Iraq that descends into chaos or a new autocracy will threaten the security of the region and the United States.

What are the challenges? Most immediately, that of forming a government. The difficulty and delays we have seen since the March elections illustrate the fundamental truth that everything in Iraq is hard and is likely to continue being hard. When the next government is in place, it will have to wrestle with the tough issues that have been shelved since the elections and their aftermath. These include the structural and constitutional issues underlying much of the tension between Kurds and Arabs in the north — disputed internal boundaries, especially Kirkuk, and the authorities of the federal government in Baghdad vis-à-vis the Kurdish regional government in Irbil, including the control of armed forces. These are akin to the states’ rights issues that were resolved neither swiftly or peacefully in this country.

The threat of al-Qaeda-sponsored terrorism persists in Iraq, as recent attacks have made clear. Iraq’s relations with its neighbors, especially Iran and Syria, remain difficult amid signs that Tehran is waiting for a U.S. exit to ramp up its efforts at destabilization and reclaiming the ground it has lost in Iraq the past several years. Other challenges include the rising popular impatience over economic stagnation and the lack of basic services; refugees; widespread corruption; and a growing imbalance between Iraqi military and civilian governance capacities.

The list goes on. It is not a record of failure but an illustration of the enormity of the challenges in Iraq. How successfully Iraqis deal with these challenges has a great deal to do with the level of U.S. engagement going forward, including the process of government formation. For the time being, we remain the indispensable broker, mediator and catalyst. But we also face the persistent problem of a Washington clock that runs much faster than the Baghdad clock. Recent polling in both countries reveals an Iraqi public fearful of the consequences of a U.S. departure, while American opinion leans toward doing just that. Regional realities and American expectations seldom coincide. Our lack of strategic patience is something that, over time, our adversaries have come to count on and our allies to fear — in Lebanon, Iraq, Afghanistan and Pakistan.

In Iraq, fortunately, we have a structure to support sustained U.S. engagement: the Strategic Framework Agreement negotiated and signed under the Bush administration, along with the security agreement. That agreement, embraced by the Obama administration, outlines a framework for cooperation in security and other fields, including diplomacy, economics, trade, education, science, technology and communications. It envisions a groundbreaking long-term partnership with Iraq that could fundamentally alter the strategic map of the Middle East. Such a relationship will take sustained U.S. engagement and resources, increasingly more civilian than military. And it may be that a new Iraqi government will request a U.S. military presence beyond the end of 2011. If so, I hope we will listen carefully.

August 1990 has meaning. August 2010 really does not — unless we invest it with such by declaring that we are leaving the field in a long war that will roll on without us in Iraq and elsewhere to our great peril. Americans have always shown a willingness to step up to a challenge when they understand the stakes. I hope the president will sound some of these themes in his coming address on Iraq.

The writer, dean of the George Bush School of Government and Public Service at Texas A&M University, was the U.S. ambassador to Iraq from 2007 to 2009.

AFP: The head of Iran's Revolutionary Guards warned the...