AFP: The head of Iran’s main exiled opposition coalition on Saturday accused forces in Iraq of carrying out an attack on a camp housing Iranians that left dozens injured. 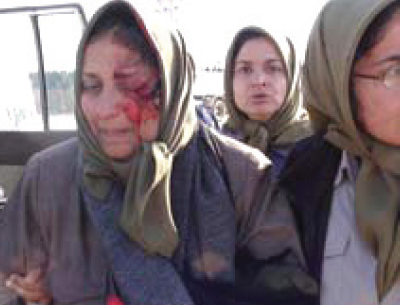 PARIS, January 8, 2011 (AFP) – The head of Iran’s main exiled opposition coalition on Saturday accused forces in Iraq of carrying out an attack on a camp housing Iranians that left dozens injured.

Maryam Rajavi, president of the National Council of Resistance of Iran, said in a statement from Paris that “the Iranian regime’s henchmen, from Iraq and Iran” carried out a “criminal aggression” on Friday against Camp Ashraf in Iraq, home to about 3,500 members of the People’s Mujahedeen of Iran (PMOI) and their families.

She said 176 residents of the camp had been wounded in the attack, which saw attackers throwing stones, iron bars and Molotov cocktails at camp residents.

“Video clips and photographs taken from the scene clearly show the active and vicious collaboration of the Iraqi armed forces and the agents of the committee under the command of the office of Iraq’s prime minister in the criminal attacks,” she said.

Rajavi said the attack showed that protection by US forces and a permanent UN monitoring team were “an inevitable necessity” at the camp.

The People’s Mujahedeen, a left-wing and Islamic movement, was founded in 1965 in opposition to the shah and has subsequently fought to oust the clerical regime that took power in Iran’s 1979 Islamic revolution.

The group set up Camp Ashraf in the 1980s — when former Iraqi dictator Saddam Hussein was at war with the Islamic republic — as a base to operate against the Tehran government. It was disarmed following the 2003 US-led invasion of Iraq.