London protests at ‘attack’ on Iran exiles at Iraq camp

BBC: Demonstrators have gathered outside the Iranian Embassy in London to protest at what they claim was an attack on Iranian exiles in Iraq. 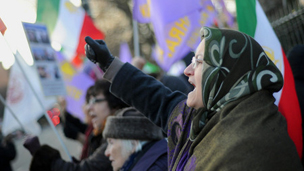 Demonstrators have gathered outside the Iranian Embassy in London to protest at what they claim was an attack on Iranian exiles in Iraq.

They have accused Iraqi special forces and Iranian agents of breaking into Camp Ashraf and injuring 175 refugees with stones, pieces of metal and other sharp objects.

They have “protected persons” status under the Geneva Convention.

The committee’s chairman, Lord Corbett of Castle Vale, called on American troops and the United Nations Assistance Mission in Iraq to intervene.

He warned of an “imminent humanitarian tragedy” and claimed that the Iranian government had played a part in the attack, calling it “Tehran’s response to growing domestic unrest and nationwide calls for regime change”.

The committee also voiced concern that Camp Ashraf’s residents were being psychologically assaulted by more than a hundred loudspeakers.

Protesters in London, who waved purple flags and chanted slogans, linked the most recent attack to a visit by the Iranian foreign minister to Baghdad.

In a statement, the National Council of Resistance of Iran claimed the attack had been “in pursuance of a dictated policy by the Iranian regime”.

“Therefore, it is the duty of the US forces and the United Nations to assume the protection of Ashraf residents immediately,” it said.

The incident comes after Spain’s central court summoned the chief of police of Iraq’s Diyala Province for prosecution for war crimes and crimes against humanity in connection with the killing of 11 residents of Camp Ashraf in July 2009.

Reuters: The Gulf state of Oman has sent a...