New York Times: The government of Iraq continued on Saturday to block the delivery of American humanitarian aid to Iranian exiles who were wounded in clashes with the Iraqi Army at a camp north of Baghdad, an American military spokesman said. 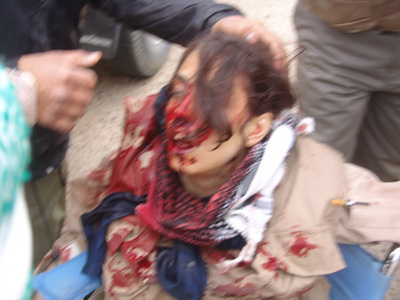 The government of Iraq continued on Saturday to block the delivery of American humanitarian aid to Iranian exiles who were wounded in clashes with the Iraqi Army at a camp north of Baghdad, an American military spokesman said.

On Saturday, a spokesman for the People’s Mujahedeen, an Iranian exile organization that the United States classifies as a terrorist group, said the number of people killed Friday by the Iraqi Army rose to 33, including 8 women. Members of the group are essentially stateless but are supposed to be protected by the Geneva Conventions.

The State Department and the United Nations have condemned the attack at Camp Ashraf, but the exact details of the episode remained murky on Saturday, and the United States military has said the Iraqi government denied it permission to deliver humanitarian assistance.

Iranians in the camp say Iraqi security forces opened fire on them, but the Iraqi government has denied that.

Reporters Without Borders, an advocacy group, condemned the Iraqi government, saying in a statement: “This news blackout is unacceptable. The security forces are denying journalists access to the camp to hide abuses committed against civilians. Anyone trying to take photographs of the clashes is being attacked in a systematic and targeted fashion.”

On Saturday the government allowed some reporters to visit the camp but not to speak to residents.

The Iranian group, which is dedicated to overthrowing the government in Tehran and has killed Americans in past terrorist acts, was given refuge under Saddam Hussein. After the American invasion, its members were stripped of their weapons but protected by international law.

The Iraqis took responsibility for the camp from the Americans in 2009.

Reuters: Europe is edging towards an Iranian oil embargo...

United States and its allies expand sanctions on Iran