AFP: Baghdad denied a US military request to provide humanitarian medical assistance to Iranian exiles wounded in deadly clashes with the Iraqi army, a spokesman for American forces said on Sunday. 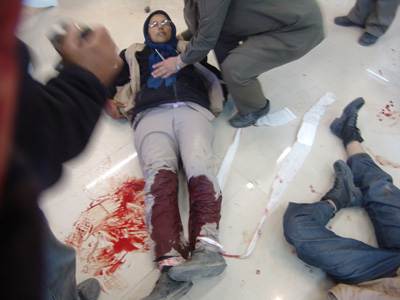 BAGHDAD, April 10, 2011 (AFP) – Baghdad denied a US military request to provide humanitarian medical assistance to Iranian exiles wounded in deadly clashes with the Iraqi army, a spokesman for American forces said on Sunday.

“We requested to provide humanitarian medical assistance to the people of Camp Ashraf following Friday’s clashes with Iraqi forces there,” said Colonel Barry Johnson, a spokesman for US forces in Iraq. “The Government of Iraq has declined our request,” he said in a statement to AFP.

“Considering the serious deficiencies resulting from two years of medical siege on Ashraf, the wounded are in serious condition and a number of them have died since yesterday’s attack,” the PMOI said in a statement on Saturday.

The PMOI has long accused Shiite Prime Minister Nuri al-Maliki’s government of hostility towards the group.

Media rights group Reporters Without Borders on Saturday condemned what it said was a news blackout imposed by Iraqi authorities on the deadly incidents at the PMOI’s Camp Ashraf, 80 kilometres (50 miles) north of Baghdad.

“The security forces are denying journalists access to the camp to hide abuses committed against civilians,” RSF said.

“Anyone trying to take photographs of the clashes is being attacked in a systematic and targeted fashion.”

After the clashes the United States said it was urging Iraqi officials “at the highest levels” to avoid violence and show restraint.

The PMOI used Camp Ashraf, which houses some 3,500 people, as a base for launching attacks on Iran during the rule of Iraqi dictator Saddam Hussein but US forces disarmed the group after the 2003 invasion of Iraq.

Since then the camp’s residents have been protected under the Geneva Conventions and were guarded by US troops, although Washington still officially considers the PMOI to be a terrorist organisation.

A left-wing and Islamic movement, the PMOI was founded in 1965 in opposition to the Shah of Iran and has subsequently fought to oust the clerical regime that took power in Tehran after Iran’s 1979 Islamic revolution.

Iran, which has jailed or executed many members of the outlawed organisation, hailed Iraq’s actions on Saturday.