Epoch Times: On the morning of April 8, Iraqi military forces entered Camp Ashraf, 60 miles northeast of Baghdad in eastern Iraq near the border of Iran, and proceeded methodically to shoot and kill 34 and wound over 300 of the unarmed camp residents. Later two more died. 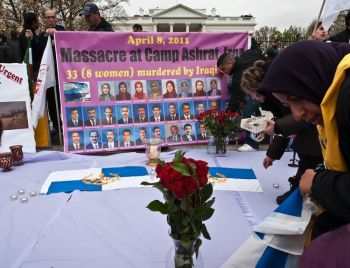 WASHINGTON—On the morning of April 8, Iraqi military forces entered Camp Ashraf, 60 miles northeast of Baghdad in eastern Iraq near the border of Iran, and proceeded methodically to shoot and kill 34 and wound over 300 of the unarmed camp residents. Later two more died.

The number of fatalities and injured is based on resident reports because the Iraqi government would not permit journalists inside the camp. Human Rights Watch reported on April 14 that United Nations human rights spokesperson Rupert Colville had seen 28 bodies at Camp Ashraf. Most had been shot, including several women, and some were run over. Six bodies were missing, Colville said.

The weapons, armored vehicles, and Humvees were provided by the United States for use by Iraqi security forces to protect their country. A similar raid occurred July 2009 when 11 residents were killed.

For 25 years, the camp has been the home of over 3,400 members of the Mujahedin-e-Khalq or “MEK,” an opposition group to the current Iranian government. The group is also known by other designations: the People’s Mojahedin Organization of Iran (PMOI) and the MKO. Saddam Hussein allowed the MEK to base itself in Iraq in 1986 when Iraq was fighting a protracted war with Iran in the 1980s.

Several questions have been raised about this attack. Who ordered it? Was the Iraqi government aware it was going to happen? Did Prime Minister Maliki act at the behest of the Iranian regime? Why was a U.S. unit deployed at Camp Ashraf ordered away just hours before the attack?

A congressional hearing was held July 7 to get the facts of what appears to be the murder of unarmed, innocent refugees.

“I believe it was an atrocity, a massacre and crime against humanity,” said Congressman Dana Rohrabacher (R-Calif.), chairman of the Oversight and Investigations Subcommittee of the House Foreign Affairs Committee.

The hearing chaired by Congressman Rohrabacher began with a video clip made by camp residents of the shootings and assaults on the population. This was followed by a teleconference video with one of the wounded, Neda Zanjanipour. She is a Canadian citizen and came to Camp Ashraf at the age of 20 in 1999 to work for freedom in Iran. Recuperating in a small clinic at the camp, she said an Iraqi soldier threw a grenade at her feet that destroyed the muscles from the knee to the hip in both legs and both arms were severely fractured.

“Iraqi sharp shooters were firing with the intention to kill, especially targeting those filming the massacre,” she said. She described the armored vehicles and the Iraqi forces were fully equipped, but the residents had no arms. “We were defenseless.”

In written testimony, Zanjanipour said that the U.S. Embassy told them that the Iraqi forces were going to launch an operation. A U.S. force was at Ashraf since April 3. The residents pleaded with the commander to remain, but the unit was ordered out on the evening before the raid on April 7.

Toner said that the American Embassy, U.S. military, and the United Nations Assistance Mission for Iraq were repeatedly urging Iraqi officials “to avoid violence and show restraint.” The United States called upon the Iraqi government to abide by its commitments to treat the residents of Ashraf humanely and in accordance with their international obligations.

“I spent 38 years in uniform; I helped negotiate the peace agreement in Bosnia … and I think I know a war crime when I see it. And I think there should be an immediate action taken by the International Criminal Court to investigate what happened in Ashraf.”

The U.S. forces could not defend Ashraf because of agreements made with the Iraqi government.

The MEK gave up their weapons and surrendered to American troops when the United States invaded Iraq in 2003 and toppled Saddam. In exchange, they were assured that “they would be treated as protected persons under the Fourth Geneva Convention, after each one of them signed an agreement renouncing violence,” said former U.S. Attorney General Michael B. Mukasey at the hearing.

In January 2009, the camp’s security was transferred to the Iraqi security forces.

It is not clear whether the residents still had the legal protection of the United States, wrote Lara Jakes and Frank Jordans in the Huffington Post, April 14. The Ashraf residents and their lawyers in Washington think it does, and demand that the American military continue to protect them and intervene on their behalf with the Iraqi government.

A factor relevant in this discussion on Iraqi forces attacking the MEK is that the group has been listed by the Department of State as a Foreign Terrorist Organization (FTO) since 1997.

Only one of the four witnesses at the hearing, Ray Takeyh from the Council on Foreign Relations, believes that the MEK deserves to be listed as an FTO. Dr. Takeyh said the MEK hides its violent past and ideological animus to America. And added that it “commands very little support within Iran.”

The other witnesses at the hearing strongly disagreed and said that it’s unfair to characterize MEK by its Marxist origins and past activities against the shah of long ago.

Every member of the MEK at Ashraf was interviewed, or in some instances, interrogated, testified Dr. Gary B. Morsch, the battalion surgeon and colonel in the U.S. Army Reserve, who was responsible for providing security and medical care, January–April 2004. He was present when the FBI led the investigation, with support from other intelligence agencies, including CIA, DIA and DOS. Dr. Morsch said the investigators were very disappointed that they didn’t find anything they could use to prosecute.

The designation in June 2004 of MEK as “protected persons” would not have been made if there was any indication that the organization retained its original intent to engage in acts of terrorism, writes Richard R. Schoeberl, a counterterrorism expert with the FBI.

One reason given why the MEK was designated as a terrorist group was that it was a “goodwill gesture” to Tehran, explained Martin Indyk, a senior Clinton administration official and former top CIA official.

In a 2002 interview with Newsweek magazine, Indyk said, “[There] was White House interest in opening up a dialogue with the Iranian government. At the time, President Khatami had recently been elected and was seen as a moderate. Top administration officials saw cracking down on the MKO—which the Iranians had made clear they saw as a menace—as one way to do so.”

Still, Indyk said that there was ample evidence for the designation. He told Newsweek, “Yes, they’re bad guys, but no—they’re not targeting us.”

The U.K. and European Union removed the MEK from their terrorist lists in 2008 and 2009, respectively.

Mukasey said, “So long as MEK remains mistakenly designated as a foreign terrorist organization, the forces in the Iraqi government that favor accommodation with Iran … can use that designation to support their violence against the group.”

MEK has garnered much support in Congress. In 1998, the majority of the House voted for a resolution for the removal of the MEK from the FTO. For those favoring regime change in Tehran over talks, MEK is regarded a legitimate resistance movement.

U.S. Army Col. (ret.) Wes Martin had been base commander of Camp Ashraf. He feels badly that the residents Camp Ashraf are being subject to “terror and torment.” He chastised the United States for revoking the protected-person status of the MEK and turning them over to the Iraqi government.

MEK provided critical intelligence on Iran’s nuclear weapons program. MEK’s help led to the discovery of the Iranian facility for uranium enrichment at Natanz and later at Qum, said Mukasey.

All the witnesses and the Congress members at this hearing were concerned about the future safety of the residents of Camp Ashraf.

Takeyh said, “It would be wrong and immoral to forcefully repatriate inhabitants of the camp back to Iran. Given the fact that the Islamic Republic lacks even the basic rudiments of an impartial justice system, they are likely to be met with certain death.”

Martin wrote they need the protection of U.S. military forces. “There is little doubt that so long as the current Iraqi government continues to do the bidding of Tehran, the members of the PMOI will not be safe.”

No deal seen clinched in U.N. nuclear talks with Iran

Reuters: The U.N. nuclear watchdog and Iran appear to...