Iraqi leader backs Syria, with a nudge from Iran

New York Times: As leaders in the Arab world and other countries condemn President Bashar al-Assad’s violent crackdown on demonstrators in Syria, Prime Minister Nuri Kamal al-Maliki of Iraq has struck a far friendlier tone, urging the protesters not to “sabotage” the state and hosting an official Syrian delegation. 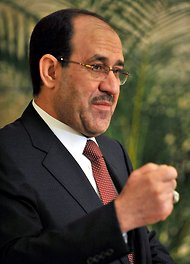 BAGHDAD — As leaders in the Arab world and other countries condemn President Bashar al-Assad’s violent crackdown on demonstrators in Syria, Prime Minister Nuri Kamal al-Maliki of Iraq has struck a far friendlier tone, urging the protesters not to “sabotage” the state and hosting an official Syrian delegation.

Mr. Maliki’s support for Mr. Assad has illustrated how much Iraq’s position in the Middle East has shifted toward an axis led by Iran. And it has also aggravated the fault line between Iraq’s Shiite majority, whose leaders have accepted Mr. Assad’s account that Al Qaeda is behind the uprising, and the Sunni minority, whose leaders have condemned the Syrian crackdown.

“The unrest in Syria has exacerbated the old sectarian divides in Iraq because the Shiite leaders have grown close to Assad and the Sunnis identify with the people,” said Joost Hiltermann, the International Crisis Group’s deputy program director for the Middle East.

He added: “Maliki is very reliant on Iran for his power and Iran is backing Syria all the way. The Iranians and the Syrians were all critical to bringing him to power a year ago and keeping him in power so he finds himself in a difficult position.”

Iraq and Syria have not had close relations for years, long before the American invasion. During the sectarian violence here that broke out after the invasion, Iraqi leaders blamed Syria for allowing suicide bombers and other militants to enter the country.

But Syria and Iran have had close ties, a factor in the recalibration of relations between Syria and Iraq. Last year, Iran pressured Mr. Assad into supporting Mr. Maliki for prime minister, which eventually helped him gain a second term. Since then, Mr. Maliki and Mr. Assad have strengthened relations, signing trade deals and increasing Syrian investment in Iraq.

But the speaker of Parliament, Osama al-Najafi, a Sunni, said this week that the Assad government was suppressing the freedoms of the Syrian people and that it was unacceptable for it to use violence to halt protests.

“For the sake of the Syrian people we demand the government, out of its responsibility to safeguard the lives of its people and their property, take the bold and courageous steps to stop the bleeding,” Mr. Najafi said.

For months, Mr. Assad has faced a protest movement that has spread through much of the country. His response has been to use the police and the military against the protesters, killing about 2,000 people so far, activists say. Thousands more have been arrested. At first, Arab leaders were largely silent, concerned that the collapse of the government would add another layer of chaos to a region reeling from uprisings. But recently some have begun to speak out, condemning the killings.

Syria’s allies in Turkey have also called for an end to the bloodshed, as have leaders in Western capitals.

But Mr. Maliki last month hosted a delegation of Syrian government officials and businessmen to discuss closer economic ties, including the construction of a gas pipeline that would run from Iran through Iraq to Syria. A month earlier, Syria’s foreign minister visited Baghdad.

In a television interview this week, Mr. Maliki said that the protesters should use the democratic process, not riots, to voice their displeasure, though Syria does not allow competitive, free elections.

He put most of the blame on the protesters and said little about the government’s ending the bloodshed. This contrasted with a position his alliance took against the Sunni monarchy in Bahrain when it stifled a pro-democracy movement among the Shiite majority there.

To protest the crackdown in Bahrain, members of Mr. Maliki’s alliance walked out of a session of Parliament, sent a ship with supplies to the protesters and called on the government to step down.

Before the Syrian uprising, Shiite and Sunni leaders in Iraq were beginning to work together again after months of paralysis that had undermined the functioning of the government. That cooperation has not yet been derailed, but the conflict over Syria threatens to strain relations.

Shaker Darraji, a member of Mr. Maliki’s State of Law bloc, said the Syrian protesters were members of Al Qaeda and that the Israelis and the Arab Persian Gulf states were behind the demonstrations. If the Assad government is overthrown, he said, it will be replaced by members of Al Qaeda, who will use Syria as a base to launch attacks in Iraq and the region.

The agenda of Israel and the Arab gulf states “is to use the sectarian differences between the Shiite ruling family in Syria and the Sunni majority” to their own advantage, Mr. Darraji said.

But Jaber al-Jabri, a member of the Sunni-dominated Iraqiya bloc, objected to that assessment.

“What is happening in Syria is not because of a terrorist group, as some say, that is not accurate,” he said. “There are whole towns rising up to demonstrate against the regime. We call on the Syrian government to listen to the people’s demands and to stop violence against their people.”

Iran strike ‘would be disastrous’

BBC News: A coalition of charities, faith groups and...