UPI: Cross-party Members of Parliament and Peers as well as prominent jurists at a parliamentary meeting Tuesday in London called on the United Kingdom, European Union and the United States to urgently propose a draft text to the U.N. Security Council approve the stationing of blue-helmet U.N. security forces at Camp Ashraf to prevent another major massacre when the U.S. forces leave Iraq at the end of the year. 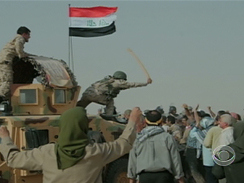 LONDON, Oct. 26 (UPI) — Cross-party Members of Parliament and Peers as well as prominent jurists at a parliamentary meeting Tuesday in London called on the United Kingdom, European Union and the United States to urgently propose a draft text to the U.N. Security Council approve the stationing of blue-helmet U.N. security forces at Camp Ashraf to prevent another major massacre when the U.S. forces leave Iraq at the end of the year.

Member of Parliament David Amess said: “The Arab Spring is feared most of all by Iran’s dictators who dread at the spread of this movement to Iran’s frontiers. Under such circumstances, the fundamentalist regime cannot tolerate a center of resistance and the existence of thousands of like-minded progressive and secular intellectuals campaigning against it.

“Today Ashraf has turned into a beacon of hope and a bastion of freedom for the millions who demand freedom, human rights and democracy for Iran.”

Mark Williams, MP, said: “Although we have in the past known the threats that exist against the unarmed residents of Camp Ashraf, we now have an illegal timeline set out by the Iraqi authorities, which, if not stopped, will mean in just over two months 3,400 unarmed Iranians to whom we provided guarantees to protect and whom international law demands we protect will be slaughtered by Iraqi forces.”

Muriel Turner, of the House of Lords, said: “It is now 20 months that Ashraf residents are living in a state of an inhuman siege by the Iran’s al-Quds Force and Iraqi government. The unending psychological torture of the residents continues with 300 loudspeakers.

“At the same time, the terrorist al-Quds Force has built surveillance towers to block communications signals next to Ashraf as part of a plan to launch the next attack. The time has come for the U.N. secretary-general and the U.N. high commissioner for Human Rights to act to station U.N. monitors in Ashraf and to cancel the suppressive deadline set by the Iraqi government.”

Hossein Abedini, a member of the Parliament in Exile of the Iranian Resistance, said: “The announcement by U.S. President Barack Obama that U.S. forces will leave Iraq by end of the year has made the situation for Camp Ashraf residents more dangerous as disturbing information has been received that Iraq is planning to launch another attack on the camp. Iraqi officials insist on closing Ashraf by end of the year. In this respect, the Iraqi foreign minister has also written to U.N. secretary-general reiterating the intention to close Ashraf.”

Peter Fraser, of the House of Lords, said: “The camp residents have submitted individual applications for refugee status and the High Commissioner for Refugees has asked Prime Minister Nouri al-Maliki to cancel the illegal deadline so that the UNHCR can complete the process of individual status determination. However, Iraq has refused to cancel the deadline and is also obstructing the work of the UNHCR in various ways. Two days after it was announced that the U.S. forces will leave Iraq, Iran’s Foreign Ministry announced with impudence that Iran and Iraq had approved a seven-point agreement for the expulsion of the PMOI from Ashraf and the camp’s closure.”

Guy Goodwin-Gill, a lawyer, pointed out that the situation at Ashraf is one in which the United Nations must intervene to offer “protection in emergency,” adding that Iraq had shown it was unable to protect refugees in its territory. He urged the United Kingdom to help the UNHCR carry out its activities.

Brian Binley, MP, said: “(British) Foreign Secretary (William) Hague must now urgently support an urgent visit to Ashraf by the EU’s envoy Jean de Ruyt and the stationing of a permanent U.N. blue-helmet protection team at the camp prior to the withdrawal of U.S. troops from Iraq at the end of the year.

“The foreign secretary should further be pressing Iraq to lift its unlawful siege of Ashraf and to cast aside its unlawful deadline of closing Ashraf forcibly at the end of the year. Finally, we need the UNHCR to urgently recognize all Ashraf residents at refugees under international law.”

Malcolm Fowler, another lawyer, said: “Given the recent seven-point agreement signed by Iran and Iraq to close Ashraf at year’s end, there will be a genocide at Ashraf in 60 days unless urgent action is taken to stop this.”

Fowler added that the Law Society’s president had, on behalf of the society’s 130,000 members, declared his support for immediate U.N. protection for Ashraf residents.

Alex Carlile, a lawyer and member of the House of Lords, said: “What is happening in Ashraf is an outrage. A U.N. monitoring team must be stationed in the camp.”

He added that the West’s policy of appeasement with Iran had failed.

The speakers warned that Iraq had only given two choices to the Ashraf residents, either to be relocated within the country and then be massacred or remain in Ashraf and be slaughtered. They warned that unless immediate international action is taken, another tragedy in a much larger scale than the April massacre is looming.

Conference Chairman Anthony Clarke of Hampstead in summarizing the position of the speakers said: “Given the current situation action must be urgently taken to prevent genocide which will occur in two months time. I urge Foreign Secretary William Hague and EU foreign policy chief Baroness Catherine Ashton to take the following steps: Publically denounce the December deadline set by the Iraqi government and use all possible means to convince the government of Iraq to cancel the deadline. Also urge the U.S. government to do so.

“Take the initiative for Ashraf protection to the U.N. Security Council for adopting an urgent decision to provide the necessary protection for the residents of Ashraf by blue-helmet U.N. forces.”

On Iran, Clarke demanded that the U.K. government ends its appeasement of the regime and begins to support the main organized opposition.

“The only organized opposition to the regime is led by a charismatic woman Maryam Rajavi whose movement for democratic change in Iran should be supported,” he said.

(Robin Corbett, Lord Corbett of Castle Vale, is a member of the U.K. House of Lords and chairman of the British Parliamentary Committee for Iran Freedom.)

Reuters: Iran's airlines and ships could be denied landing...

Syria puts a crude weapon to deadly use

AP: They are known as barrel bombs - makeshift,...