CNN: About 400 members of an exiled Iranian opposition group who are the first to leave a long-term camp in Iraq under a U.N. plan criticized their treatment and the conditions at the new temporary site Saturday. 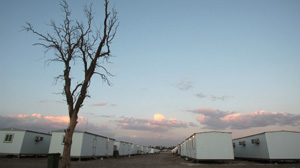 Baghdad (CNN) — About 400 members of an exiled Iranian opposition group who are the first to leave a long-term camp in Iraq under a U.N. plan criticized their treatment and the conditions at the new temporary site Saturday.

The group left Camp Ashraf at midnight following 12 hours of inspections and checks, Shahin Gobadi of the National Council of Resistance of Iran said in a statement.

When they arrived seven hours later at the new site, a former U.S. military base near Baghdad International Airport long known as Camp Liberty, the group discovered a heavy presence of police.

Camp Liberty has been renamed “Camp Hurriya” and is now an Iraqi facility.

Another inspection was then demanded, prompting the residents to protest what they consider “degrading, humiliating and inhumane treatment” and the obstructive behavior of the Iraqi forces by refusing to leave the transit buses, Gobadi said.

“The preliminary reports indicate that Camp Liberty (Hurriya) is a prison from all aspects,” he added.

The group’s relocation to the new site was agreed between the United Nations, Iraqi authorities, the United States and the European Union.

The U.S. commended Iraq for the relocation to the camp and called for the Iranian expatriates to cooperate with Iraqi and U.N. authorities in a State Department statement from spokeswoman Victoria Nuland Sunday.

“Patience and willingness to resolve issues related to the relocation will be important as the process moves ahead,” Nuland said.

Human Rights Watch has criticized tensions between the Shiite-lead Iraqi government and the MEK’s leadership. And it has also accused the MEK leaders at Camp Ashraf of holding individual residents — who attempted to leave — against their will, coercing them to remain with the organization.

From Camp Hurriya, the U.N. High Commissioner for Refugees will begin efforts to resettle the group outside of the country.

Martin Kobler, the U.N. secretary general’s special representative and head of the U.N. Assistance Mission for Iraq (UNAMI), was at the temporary site to welcome the new arrivals.

“This is the first step towards a better future outside Iraq,” he said. “I look forward to their continued cooperation with the Iraqi authorities to complete the relocation without delay.”

He also praised the Iraqi for having ensured the “safe and secure relocation” of the first group of residents and urged them to guarantee the human rights and safety of all those still to relocate.

Camp Ashraf has been home to members of the Mujahedin-e Khalq, or MEK, for more than 25 years. More than 3,000 exiles, described as Iranian resistance figures and their sympathizers, live at the camp.

The MEK has been on the U.S. terrorism list since 1997 because of the killing of six Americans in Iran in the 1970s and an attempted attack against the Iranian mission to the United Nations in 1992. However, since 2004, the United States has considered the residents of Camp Ashraf “noncombatants” and “protected persons” under the Geneva Conventions.

Before moving, the Camp Ashraf residents had demanded a commitment that no Iraqi police would remain inside the new site, in order to ensure the security of the residents. The group believes the current regime in Iraq, under orders from Prime Minister Nuri al-Maliki, has previously staged deadly attacks against Camp Ashraf.

Instead, there are several police posts inside the facility and residents must be accompanied by the police even to go to the dining area, Gobadi said.

“The most important of the Ashraf residents’ demands is that the police must leave the camp area and stay outside the walls,” a statement released by the group Friday said. “This is a condition without which it will be impossible to have more people in Liberty (Hurriya) as it will result in further confrontations, tensions and killing.”

The residents also asked for guarantees with regards to the site’s infrastructure — and say these have not been met.