PRNewswire: Former US officials urge formation of commission of inquiry about conditions at Camp Liberty, Iraq, where hundreds of Iranian dissidents have relocated, according to Global Initiative for Democracy

Former US officials urge formation of commission of inquiry about conditions at Camp Liberty, Iraq, where hundreds of Iranian dissidents have relocated, according to Global Initiative for Democracy 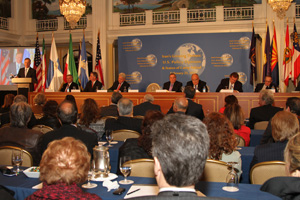 WASHINGTON, Feb. 26, 2012 /PRNewswire-USNewswire/ — Former New York City Mayor Rudy Giuliani called for the formation of a commission of inquiry, consisting of a group of prominent former US politicians and law enforcement officials, to visit Camp Liberty, Iraq, where some 400 Iranian dissidents are living, after they were relocated from Camp Ashraf, their home of 25 years.

“I would suggest that we ask …the House of Representatives to pass a resolution that would appoint a commission…that would immediately go to Iraq and examine Camp Liberty, and report back within…two or three days what they see,” Giuliani said. “Is Camp Liberty really a suitable place? Should it be a relocation center? Is it really a prison, or a concentration camp?”

“This is a scandal.  This is a fraud; a fraud not involving money, but a fraud involving threats to human life. What we need immediately is a commission of inquiry to determine how this fraud was perpetrated. Who certified, who approved that hell hole, that garbage dump?  Who said that it met United Nation’s standards? Somebody is responsible for perpetrating that fraud and for getting 400 innocent people to risk their lives and their health to be exposed to that kind of trash and that kind of hazard to their health.  We have to get to the bottom of this,” Harvard Law Professor, Alan Dershowitz emphasized.

Despite the United Nations certification that the infrastructure and facilities at Camp Liberty meets “international standards,” the camp lacks even the most basic conditions, providing only intermittent electricity and insufficient supplies of running water. The Iraqi government does not allow international monitors or visitors to Camp Liberty.

Concerns about those in Camp Liberty are heightened by the fact that Camp Ashraf has twice been attacked by Iraqi military forces, resulting in 47 deaths and more than 1,000 injuries, since the Iraqi government took control of the camp from the US military in 2009. 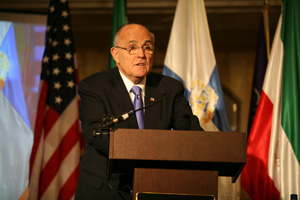 Giuliani told the conference, that the US should be prepared to accept the dissidents living at Camp Ashraf and at Camp Liberty. He joined other panelists, former Homeland Security Director Tom Ridge, Democratic National Committee Chairman Howard Dean, and former Deputy National Intelligence Officer for Transnational Threats on the National Intelligence Council, Glenn Carle, to call for the U.S. State Department to remove the MEK from its list of Foreign Terrorist Organizations. 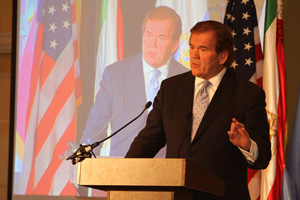 “In 2012, there is no reason, no justification, under any of the guidelines under the law that this group deserves to be treated as a terrorist organization,” Ridge said. “From October 8th of 2001 until the day I walked out as Secretary of Homeland Security, I used to get a threat matrix every day.  I must tell you, I don’t recall ever seeing a reference to the MEK as an organization or a terrorist who allegedly belonged to MEK threatening the United States (or) its citizens. They do not belong on the list. They’re not a terrorist organization. Take them off the list.”

Regarding the correct policy to counter the threats posed by the Iranian regime, Mr. Carle emphasized, “Tactically, the field intelligence work I did for over two decades argues in favor of de-listing the MEK from its now outdated and wrong designation as a terrorist organization.  Strategically, it argues working in favor with the MEK as a means of pressuring a regime which is a destabilizing influence in the entire region.”

Multiple protests have recently erupted in various cities across...