Iran presses for official to be next leader of Shiites

New York Times: Iran is positioning its own candidate for the post, a hard-line cleric who would give Tehran a direct line of influence over the Iraqi people, heightening fears that Iran’s long-term goal is to transplant its Islamic Revolution to Iraq.
The New York Time 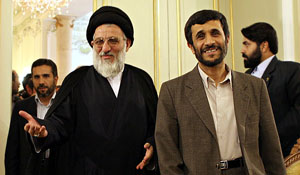 NAJAF, Iraq — As the top spiritual leader in the Shiite Muslim world, Grand Ayatollah Ali al-Sistani has instructed his followers on what to eat and how to wash, how to marry and to bury their dead. As a temporal guide, he has championed Iraqi democracy, insisting on direct elections from the earliest days of the occupation, and warned against Iranian-style clerical rule.

Frail at 81, he still greets visitors each morning at his home on a narrow and sooty side street here, only steps from the glimmering gold dome of the Imam Ali Shrine. But the jockeying to succeed him has quietly begun, and Iran is positioning its own candidate for the post, a hard-line cleric who would give Tehran a direct line of influence over the Iraqi people, heightening fears that Iran’s long-term goal is to transplant its Islamic Revolution to Iraq.

The succession, a lengthy and opaque process in which the outcome is by no means assured, could shape the interplay of Islam and democracy not only in Iraq, where Shiites are the majority, but also across a Shiite Muslim world that stretches from India to Iran, Lebanon and beyond. The ayatollah’s prescriptions for daily living are imbued with the force of law among the majority of the world’s 200 million or so Shiites who follow him, his religious teachings are sacrosanct and his political sway is powerful.

For Iraq, the contest adds another element of uncertainty in a fledgling democracy whose politics are in upheaval as its three main factions — the Shiites, Sunnis and Kurds — contend for power, a contest that analysts worry could help tilt the country back toward authoritarianism.

“Iraq does not need this now,” said Hussein Mohammad al-Eloum, a cleric from a prominent religious and political family; the ambassador to Kuwait and a former oil minister are his sons. “Sistani, may God protect him.”

Iran’s candidate, Ayatollah Mahmoud Hashemi Shahroudi, 63, is an Iraqi-born cleric who led the Iranian judiciary for a decade and remains a top official in the government there. With Iranian financing, his representatives have for months been building a patronage network across Iraq, underwriting scholarships for students at the many seminaries here and distributing information.

“He’s there to prepare himself for after Sistani,” said Mehdi Khalaji, a senior fellow at the Washington Institute for Near East Policy, who spent 14 years studying at seminaries in Qum, an Iranian holy city.

The move has raised fears that Iran is trying to extend its already extensive influence in the political and economic life of Iraq. A recent visit by Iraq’s prime minister, Nuri Kamal al-Maliki, to Tehran, where he met with Ayatollah Shahroudi, raised tensions further. Reidar Visser, a historian, wrote in his Iraqi politics blog that Mr. Maliki’s visit “did nothing to kill the rumors about some kind of Iranian design on the holiest center of Iraqi Shiism.”

The process of choosing the next supreme spiritual leader is a tortuous and somewhat spontaneous one that relies on the will of the people, expressed in whom they choose to pay their religious taxes to — devout Shiites are expected to pay one-fifth of their discretionary income to their ayatollah, or marja — and the validation of a spiritual leader’s religious scholarship by his clerical peers.

It could take several years before a clear successor rises.

“It will take Najaf two to three years before a strong marja emerges,” said Sami al-Askari, a Shiite politician here who lived in exile in Iran, who knows Ayatollah Shahroudi from his time there. “It is not like the Vatican. In the marjaiya it is a slow and complicated process.” The marjaiya is the Shiite leadership body in Iraq.

The tradition in Najaf and its religious academy, called the Hawza, is to keep a measured distance from politics, to live a pious and ascetic life and intervene only occasionally in political affairs.

Ayatollah Sistani is Iranian but was able to rise in Najaf partly because he was never involved in Iranian politics. He intervened at key moments during the American occupation, including a celebrated episode in 2004 when he called hundreds of thousands of supporters into the streets to demand direct elections over the objections of the American authorities. He was also a voice of moderation and restraint during the years of sectarian carnage, when Iraq was seemingly on the verge of tumbling into the abyss.
Agence France-Presse

But for more than a year he has refused to even meet with politicians — he has barely left his house for the last several years — and has been subjected to constant rumors about his health.

Yet on a recent morning, as he does almost every day of the year, he greeted visitors who had lined up outside his spare and unassuming house, surrounded by open-air storefronts selling religious items. He agreed to meet, although not be interviewed by, a reporter for The New York Times. Seated in the corner of a stark room carpeted in Persian rugs, he was helped to his feet by aides to shake hands. He exchanged pleasantries and showed no outward signs of serious illness.

Clerics here give high marks to the quality of Ayatollah Shahroudi’s scholarship, partially because he studied under and had the validation of Ayatollah Muhammad Bakr al-Sadr who was assassinated in 1980 by Saddam Hussein’s henchmen and if alive today would be the father-in-law of Moktada al-Sadr, the anti-American cleric. Ayatollah Sadr is still a revered figure.

Still, the clerics here would prefer to see another Najaf-based leader rise to the level of top ayatollah to safeguard Najaf’s quietist tradition.

“Shahroudi had an official job in Iran, which was the head of the judiciary,” Mr. Eloum said. “And the important point for the Hawza in Najaf is independence, full independence from any kind of government, even if it’s the Iraqi government.”

Mohammed al-Mana Khani, another senior cleric, said: “The way Shahroudi thinks has changed. If he had kept his views learned from Sadr and stayed in Najaf, it would have been better. But 30 years in Iran has changed him.”

A slim biography of Ayatollah Shahroudi that is being passed out here contains the details of a life of activism, exile and rise to political power, with deep sympathies toward militant Islam, that seems sharply at odds with the traditions of Najaf.

A photograph at the end of the book shows Ayatollah Shahroudi posing with a famous Iranian militant, Mostafa Chamran, a Berkeley Ph.D. who turned to revolution and organized guerrilla fighters in Lebanon before being killed in the Iran-Iraq war in 1981.

The ayatollah emphasizes his suffering under Mr. Hussein’s government — three of his brothers disappeared, their exact fates still unknown. He is also said to be quite wealthy, a stark contrast to the piety and simple life believers expect of their leaders and which is embodied by Ayatollah Sistani.

“Shahroudi is one of the wealthiest men in Iran,” said Mr. Khalaji, the analyst and former student in Qum. “He imports goods, has businesses and owns many factories. His personal life is luxurious.” By being a government insider, he said, the cleric made a fortune in past years by importing auto parts and equipment for oil exploration from Eastern Europe.

Ayatollah Shahroudi has not visited Najaf since his representatives began establishing their organization here. “He wants to come and visit,” said Ibrahim al-Baghdadi, an Iraqi who runs his office here. “It’s his country. He was born here.”

Mr. Baghdadi described the tensions over Ayatollah Shahroudi’s organizational presence in Najaf as efforts from others in the clerical community to “disturb the streets.” He suggested an Iranian system of government would not work because, “The Constitution rules here, and Iraqis have voted for it.”

Outwardly espousing ambitions to succeed Ayatollah Sistani would be a breach of etiquette.

UPI: U.S. and European sanctions are taking their toll...