Amnesty International: Authorities in Iraq must urgently investigate the attack against a camp of Iranian exiles that left several people dead and injured and ensure all those wounded receive appropriate medical care, said Amnesty International today. 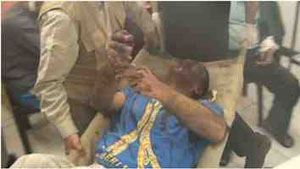 Authorities in Iraq must urgently investigate the attack against a camp of Iranian exiles that left several people dead and injured and ensure all those wounded receive appropriate medical care, said Amnesty International today.

The investigation should also look into the conduct of Iraqi security forces in the lead up and during the attack and whether they have failed to prevent any such attack.

Several people reportedly died and have been injured as a result of the attack against Camp Liberty, home of some 3,000 Iranians in exile in Iraq, on 9 February.

“Authorities in Iraq must ensure not only that those responsible for this attack are brought to justice but that those living in the camp are protected.”

The residents of Camp Liberty, members of the People’s Mojahedin Organization of Iran which opposes the Iranian government, were recently relocated to a site in north-east Baghdad – after having been settled for 25 years in Camp Ashraf.

Residents claimed the Iraqi forces attacked some of them during the relocation process in 2012.

Today the UN High Commissioner for Refugees’ Chief, Antonio Guterres, stressed that the residents of Camp Liberty are asylum seekers undergoing refugee status determination process and as such are entitled to international protection.

In April 2011, Iraqi troops stormed camp Ashraf using grossly excessive force, including live ammunition, against residents who tried to resist them. Some 36 people ­– 28 men and eight women – were killed and more than 300 wounded. Those injured were prevented from leaving the camp to obtain medical treatment.

In a joint letter, a group of United Nations human...