Calls for Iranian exiles to be moved to US after attack

AFP: Top former American officials on Saturday condemned an attack on a camp of Iranian exiles in Iraq that left five dead, and urged Washington to allow the residents to take refuge in the United States. 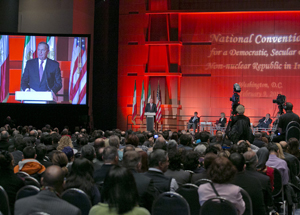 WASHINGTON (AFP) — Top former American officials on Saturday condemned an attack on a camp of Iranian exiles in Iraq that left five dead, and urged Washington to allow the residents to take refuge in the United States.

The National Convention for a Democratic Iran, meeting in Washington, also accused the US administration of reneging on promises to protect members of the People’s Muhajedeen of Iran, or Mujahedeen-e-Khalq (MEK) living in Camp Liberty.

The camp on the western outskirts of Baghdad came under mortar fire early Saturday. It has been home to some 3,000 MEK members since last year, after they moved on Iraq’s insistence, from their historic site of the 1980s — Camp Ashraf, near the Iranian border.

About 1,500 Iranian-Americans at the Washington convention, organized before Saturday’s attack, denounced the attack and called for better protection for the residents who are in the process of being resettled in other countries under a UN-led program.

“These people can all be removed within hours,” former New York mayor Rudolph Guiliani, who was a guest speaker, told the convention.

“Planes can be sent immediately. They can be here within a day. We have done far more difficult things than that. It’s only about 3,000 people.”

Another guest speaker, former national security advisor General James Jones, said: “Camp Liberty has a name that is not worthy of a prison, which it has become.

“It is the responsibility of all countries of goodwill to ensure that the victimization of the Ashraf refugees is not perpetrated and that this debacle comes to a swift and just conclusion.”

It was not immediately clear who carried out the attack, the first since the residents moved, clearing the way for the US to remove the group from its list of organizations it deems to be terrorist.

Five members of the People’s Mujahedeen were killed by the mortar rounds and rockets, according to two Iraqi security officials who spoke on condition of anonymity.

The MEK, whose leadership is based in Paris, said in a statement that six people were killed and more than 100 wounded.

Jones added America should “welcome a generous number of refugees and in so doing setting the example for the rest of the world.”

US discusses Iran sanctions with Venezuela

AFP: US officials have "discussed" concerns that Venezuela may...