AP: Deadly violence erupted at a contentious Iranian exile camp inside Iraq early Sunday, leaving international observers scrambling to determine the cause of the bloodshed and the number of casualties. 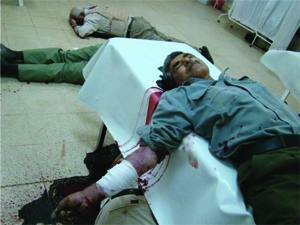 BAGHDAD (AP) — Deadly violence erupted at a contentious Iranian exile camp inside Iraq early Sunday, leaving international observers scrambling to determine the cause of the bloodshed and the number of casualties.

The dissidents alleged that more than 50 were killed and accused the Iraqi government. Baghdad said an internal dispute was to blame. And the United Nations mission to Iraq, which has been closely involved in trying to find a viable long-term solution for the dissidents, acknowledges it does not have a clear picture what happened.

“The only thing we can confirm is there are a lot of casualties,” said Eliana Nabaa, the spokeswoman for the U.N. mission to Iraq. “How, why, when? It’s difficult to assess.”

If the exiles’ claims of the number of casualties are proved true, it would mark a stunning blow for the remaining core of Mujahedeen-e-Khalq members still living at Camp Ashraf. The Saddam Hussein-era community northeast of Baghdad had been home to only about 100 members of the MEK before Sunday’s events.

The MEK opposes Iran’s clerical regime and until last year was labeled a terrorist group by the United States. Thousands of other MEK members who had been living in Camp Ashraf agreed to move to a Baghdad-area camp last year. They remain stuck in a country that does not want them as a process to resettle them abroad slowly drags on.

A statement issued by the U.N. in New York said Secretary-General Ban Ki-moon deplores events at Camp Ashraf that “reportedly left 47 killed,” though the U.N. cautioned that figure had not been confirmed.

A spokesman for the MEK’s parent organization, the Paris-based National Council of Resistance of Iran, alleged that those killed died in a raid launched by Iraqi security forces early Sunday. The spokesman, Shahin Gobadi, said some of those killed were found with hands cuffed behind their backs.

Gobadi said that 52 people inside the camp were killed, and he provided photos allegedly from the scene that showed several people that appeared to have been killed with gunshots. It was not possible to independently verify the authenticity of the photos.

Ali al-Moussawi, a spokesman for Iraq’s prime minister, said a preliminary investigation suggests several camp residents died as a result of infighting inside the facility. He denied that Iraqi forces were involved in the violence, and said authorities are still trying to determine the number of casualties.

Maj. Gen. Jamil al-Shimari, a provincial police chief in Diyala who oversees the external protection of the camp, reported at least 24 people killed. He said Iraqi forces stationed outside heard gunshots coming from inside the camp, and said there appeared to be “some kind of struggle among the residents.” He denied involvement and said his forces at no point entered the camp itself.

An intelligence official involved in helping secure the perimeter of the camp reported 19 killed, and said the clashes involving Iraqi forces broke out when camp residents tried to attack them. A police official in Diyala province, where Camp Ashraf is located, offered a similar casualty figure. They agreed to speak only on condition of anonymity because they were not authorized to release the information.

The United Nations and the United States both condemned the violence, though neither ascribed blame.

“The priority for the Iraqi government is to provide immediate medical assistance to the injured and to ensure their security and safety against any violence from any side,” said Gyorgy Busztin, the acting U.N. envoy to Iraq.

Busztin said that the U.N. mission “is using all possible means to conduct its own assessment of the situation.”

The U.S. condemned the attack and voiced support for the U.N.’s fact-finding efforts, demanding that those found responsible be held accountable and urging Baghdad to aid camp residents.

“We further call on Iraqi authorities to act with urgency to immediately ensure medical assistance to the wounded and to secure the camp against any further violence or harm to the residents,” the State Department said in a statement.

The MEK fought alongside Iraqi forces in the 1980-88 Iran-Iraq war, and several thousand of its members were granted sanctuary inside Iraq by Saddam. The group renounced violence in 2001 and was taken off the U.S. terrorism list last September.

Iraq’s current Shiite-led government, which has strengthened ties with neighboring Shiite powerhouse Iran, considers the MEK’s presence in Iraq illegal and wants its followers out of the country. It has been working with the U.N. to resettle MEK members, but the process has been slow.

Iran’s powerful Revolutionary Guard welcomed news of the MEK members’ deaths, which it called “divine revenge.” In its statement, carried by the official IRNA news agency, the Guard noted the MEK’s alliance with Saddam and expressed hope that their deaths would please the relatives of their past victims.

Iranian state television took note of the attack too, reporting at one point that 23 MEK members were killed by “the Iraqi people and mujahedeen.” It gave no sources for the information and didn’t air any footage.

Previous Iraqi raids on the camp, including one in April 2011, claimed dozens of lives.

Camp Ashraf was once home to more than 3,000 MEK followers, but most moved to a former U.S. military base on the outskirts of Baghdad last year while the U.N. works to resettle them abroad.

The Baghdad-area camp, known as Camp Liberty, has since been targeted by militants in rocket attacks that have killed 10 people and injured many more, according to the MEK.

The MEK last month accused the Iraqi authorities of deliberately cutting off water and electricity to Camp Ashraf, a charged denied by Georges Bakoos, who oversees the MEK issue for the Iraqi government.

He said in an interview last week that authorities would be moving ahead with court proceedings to evict the last Camp Ashraf holdouts, possibly as soon as in the next few weeks.

A total of 162 MEK members have been resettled abroad so far, mostly in Albania.

Reuters: Iran initially enriched uranium from China but is...

AFP: Iraq's use of the death penalty has increased...